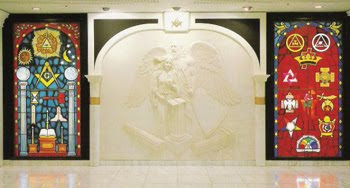 Some communication is coming from Freemasons in Japan. A message has been forwarded from the Scottish Rite in Tokyo:

You will be happy to know that the beautiful Tokyo Masonic Center came throught the Tohokku-Kanto Megathrust Earthquake with only two extremely minor inconveniences.
Two of our filing cabinets tipped over and their drawers flew open. Our office secretary had the files back in place after most of the major shaking stopped. In the picture you can see the mess and Ill. Ambrose; Mr. Nagai (TMA) Asako-san (Mori Trust Maintainence) and Ill. Patterson. Thanks to Ill. Phil for helping put the cabinets back against the wall.

The other was our Soverign Grand Commander Seale's portrait which fell off the wall of the Deputy's office and spread broken glass over the carpet. The portrait awaits only new glass and a stronger hook.

The other good news is that the messages from Ill. Cripe and the Scottish Rite office reached all the brethren. No one showed up for the Advisory Conference.

Unfortunately, those of us working at the Masonic Center stayed all night in our offices. Luckily the heat came on about midnight and office chairs provided a little comfort during the night. There were a lot of people walking around the area and cars hardly moved at all. Phones were out most of the night, but the Internet and Skype worked! 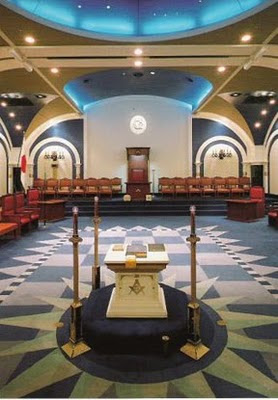 According to the List of Lodges Masonic, there are 14 lodges under the Grand Lodge of Japan, with approximately 1,819 members. Undoubtedly there are brethren who have been caught in the multiple disasters there this week, but the list does not show active lodges in the cities that bore the brunt of the tsunami.
Posted by Christopher Hodapp at Sunday, March 13, 2011

Email ThisBlogThis!Share to TwitterShare to FacebookShare to Pinterest
Labels: Japan