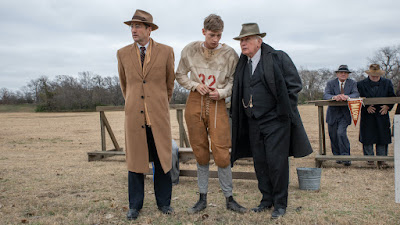 by Christopher Hodapp
A new movie released this month tells the story of a very special group of boys during the 1930s at the Masonic Home of Texas and the dedicated men and women who helped to raise and mentor them. 12 Mighty Orphans stars Luke Wilson and Martin Sheen in a true (albeit highly fictionalized) story of the 'Mighty Mites' a football team made up of Masonic Home orphans in Fort Worth who beat all the odds and make it to the Texas state championship during the thick of the Great Depression in the 1930s.
The Masonic Home and School of Texas in Fort Worth was opened to Masons, widows and orphans in 1889, and remained in operation until 2005. The movie is based on former Masonic Home orphan Jim Dent's book of the same name.

12 MIGHTY ORPHANS tells the true story of the Mighty Mites, the football team of a Fort Worth orphanage who, during the Great Depression, went from playing without shoes—or even a football—to playing for the Texas state championships. Over the course of their winning season these underdogs and their resilient spirit became an inspiration to their city, state, and an entire nation in need of a rebound, even catching the attention of President Franklin D. Roosevelt. The architect of their success was Rusty Russell, a legendary high school coach who shocked his colleagues by giving up a privileged position so he could teach and coach at an orphanage. Few knew Rusty's secret: that he himself was an orphan. Recognizing that his scrawny players couldn't beat the other teams with brawn, Rusty developed innovative strategies that would come to define modern football.

After the Civil War up until the end of the last century, Masonic grand lodges all over the country constructed and operated retirement homes for their members and widows, and many of these facilities also included orphanages. Masonic orphanages weren't just reserved for children of Freemasons who had no living relatives. Often it was a case of a destitute family that couldn't afford to care for their own children, or parents who had to travel or relocate around the country in order to find work. During the Depression, lots of these Masonic homes had so many children to care for that they would establish their own schools on the campus. 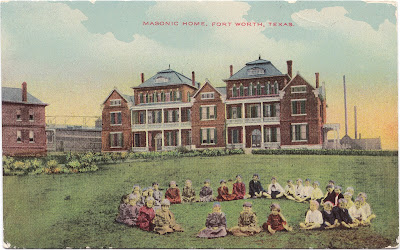 12 Mighty Orphans opened in theaters on June 11th. I haven't seen it yet, so I don't know how much the story of the Masonic Home or Masonry itself gets told. Curiously, the movie trailer and official press releases only refer to an "orphanage" without mentioning the Masons. And the only visual clue in the trailer is a sunrise shot over the Masonic Home's water tower with Fort Worth in the Distance. 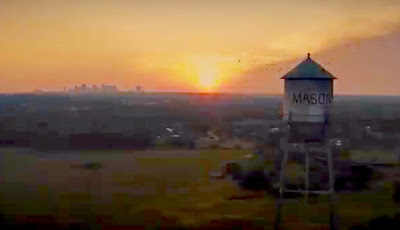 Every picture like this needs a villain. The 'bad guy' of this one is the greedy manager of the Home's for-profit printing shop (described as a one-dimensional part played by the typically one-dimensional Wayne Knight) who spends the movie carping that "Every minute those kids are on the field, we're losing money!" Larger Masonic Homes with orphanages were often located out in the country and were pretty self-contained in their earlier days. They often had their own working farms on which they raised cattle and chickens for their dairy needs, and the Home kids were usually required to help with the farm work. But more than a few Masonic Homes really did have their own for-profit printing shops. Masonic grand lodges published their own magazines, printed up their own reams of rule books, annual proceedings, dues cards, lodge histories, and much more. Grand lodges were awash in their own seas of bureaucratic paperwork, so it made sense to operate an in-house print shop, with the Masonic Home boys learning the printing trade.
Reviews of 12 Mighty Orphans are encouragingly positive, which is surprising in the age of snark in which we find ourselves. While it seems to follow the usual sports movie formula of 'underdogs without a chance beating all the odds and becoming champs with the help of a grizzled coach and mentor ' (like Hoosiers did with basketball), the truth is that it's the sort of inspiring story that doesn't get told very often anymore and actually makes you feel good when you leave the theater. After more than a year of COVID isolation, there's a lot to be said for having two hours of inspiring and uplifting storytelling.
UPDATE 6/27/2021 11:50AM:

The venerable Robert Duvall has a very brief cameo in 12 Mighty Orphans, and he was on Steven Colbert's late-night talk show on Thursday. They talked about the new movie, and Colbert mentioned the story is about an orphanage. Duval emphatically corrected him, saying, "MASONIC orphanage."
At one point Colbert asked him point-blank, "Are you a Mason?" and Duval answered "No."
Then Colbert asked, "Do you believe in secrecy?" and Duval answered "Yes."
But I did find it a bit sad that Duvall, at the age of 90, said he really didn't know much about the Masons. Yet he was born in 1931 and was an adult at the time of U.S. Masonry's greatest popularity.
Posted by Christopher Hodapp at Friday, June 25, 2021 2 comments: