Brother Grayson Mayfield on the Palmetto Bug blog is announcing that the South Carolina Masonic Research Society will hold its first symposium and banquet on April 22nd, 2011 at 7:00 PM in the Omar Shrine Temple, 176 Patriots Point Street, Mt. Pleasant, South Carolina 29464. The cost is $25.00 per person and this will be a formal or semi-formal dress event.

The keynote speaker will be Brother Michael A. Halleran, author of The Better Angels of our Nature: Freemasonry in the American Civil War and former editor of the Scottish Rite Research Society’s Plumbline. Halleran is a freelance writer and a practicing attorney in the Flint Hills of East-Central Kansas. A lecturer at Emporia State University, he is also an active Freemason, belonging to both Emporia Lodge No. 12, AF&AM, and Mount Zion Lodge No. 266, AF&AM, Topeka, Kansas. Halleran received the Mackey Award for Excellence in Masonic Scholarship by the Scottish Rite Research Society for his article on Civil War Freemasonry in that society’s journal: Heredom, vol. 14 (2006). In addition, he is the author of a regular column for The Scottish Rite Journal. He is a member of the Quatuor Coronati Correspondence Circle, and the Scottish Rite Research Society where he studies American military Masonry and the traditions of military lodges worldwide.

Also speaking will be WB Wayne Sirmon, an educator and scholar from Mobile, Alabama, who will be speaking in the dress and character John Fretwell (Grand Master of Texas, 1868) on the construction and testing of Confederate submarines as well as the development of torpedo mines. Brother Wayne will then discuss the discovery of the H.L. Hunley Submarine and the events leading up to the conduct of the funeral of the crew and the Masonic burial of Lt. George Dixon in Charleston in 2004. 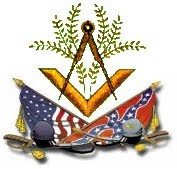