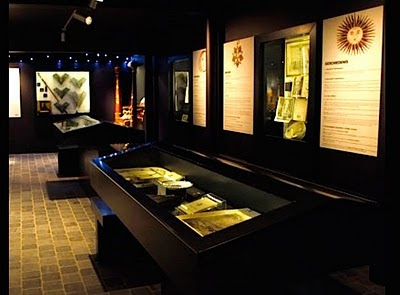 Its new space is in a beautifully renovated facility, the Hotel Dewez, located at 73 rue de Laeken in Brussels, near the Brouckère or the St Catherine Underground stations. The building was originally the mansion of Laurent-Benoit Dewez (1731-1804), chief architect at the court of Governor Charles of Lorraine.

The Museum has been partially supported by Belgium's National Lottery.

The Belgian Museum of Freemasonry is open to the public Tuesday to Friday from 1pm to 5pm (6pm in July-August) and Saturday from 1pm to 4pm. It is also open to groups by appointment from Tuesday to Friday from 10am to 12pm. Guided tours, lectures and courses for groups must be reserved at least 15 days in advance). The Museum is closed on Sundays, Mondays, holidays and between Christmas and New Year.
Posted by Christopher Hodapp at Tuesday, March 29, 2011