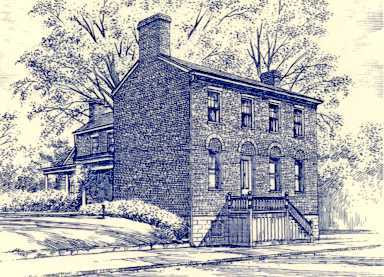 Many young Freemasons in Indiana are unaware of the Masonic treasure hiding in an unremarkable brick building on a quiet street in Madison, Indiana. It is a place every Hoosier Mason should visit, and even better, the perfect setting for a new candidate's initiation into the Craft.

Legend has it that the Grand Lodge of Free and Accepted Masons of Indiana, was organized in what we today call Schofield House on January 13, 1818. Built in 1816 in the federal style, this is believed to be the first two-story tavern house in Madison. The five lodges chartered at this first meeting were Vincennes #1, Madison #2, Charlestown #3, Lawrenceburg #4 and Corydon #5. Alexander Buckner, of Charlestown Lodge was the elected the first Grand Master.

The Grand Master of Indiana has announced a special event on April 10th, 2011:

Brethren,
On January 12, 1818, fourteen men met in a small room on the second floor of the Schofield House in Madison, Indiana and began the journey that is Indiana Freemasonry. As a result, on January 12, 2018, the Grand Lodge of Indiana will celebrate its 200th anniversary.

We are so lucky to have been able to preserve the building in which we got our start. It is a great part of our heritage, and it is our responsibility to support and maintain it. Many Lodges enjoy traveling to Madison and conferring degrees in that historic room. I hope that we can continue to have those events for the next 200 years.

On Sunday, April 10, 2011, I will make a Grand Master's Pilgrimage to the Schofield House. I invite you to join me. I will be at the Schofield House from 12:00 noon until 4:00 p.m., but I will not leave until all visitors have left.

If you can come and enjoy this historic home with me, I will give you a token of my appreciation. These tokens will be available only that day, and only from me.

At the end of your visit, you will be given the opportunity to show your support by leaving a free will donation that you feel is appropriate. I hope to see several hundred of my Brethren on April 10.

Madison is a terrific place to explore. Homesteaders began populating the area in the early 1800s. In about 1810, settlers purchased 65 acres of land from the Indiana Territorial government for about $2.50 per acre and christened the town "Madison" after the reigning President of the United States. Indiana became a state in 1816, and Ohio and Kentucky lodges banded together quickly to form a new Grand Lodge of Indiana.

The large lodge room on the second floor was originally for overnight traveling guests. They were served their meals in the kitchen on the first floor, and the room directly below the lodge room was a tavern from which the brethren could order their wine, whisky and ale. The corner room was a general store, where, among other important items, their treasured cigars were available.

In 1972 the Ancient Accepted Scottish Rite in the Valley of Indianapolis purchased the property from the heirs of Mrs. Charlotte Schofield for eventual presentation to the Freemasons of Indiana. It was turned over to the Masonic Heritage Foundation, and extensive restorations were made. The building was opened to the public as a Masonic museum on April 19, 1975.

The upstairs is suitable for conferring degrees on candidates, but most would agree that the Entered Apprentice degree is the simplest to perform in the small room. It does not lend itself well to the MM degree, as there is limited floor-space and limited areas for seating. Be aware that the stairs leading up to the lodge room are steep and most certainly NOT handicapped accessible.

Nestled on the Ohio River, beautiful and historic Madison, Indiana is a terrific place to spend the day or a whole weekend, and the area is dotted with wonderful Bed & Breakfast establishments. Your ladies will not be bored while you are engaged in Masonic activities. There are also a number of nearby restaurants and taverns for your post-degree celebration, including the nearby Historic Broadway Hotel and Tavern, which dates from 1834 and is the oldest continuously operated hotel and tavern in Indiana. Which is still cigar friendly, by the way. And the perfect place to end a great day in lodge.
Posted by Christopher Hodapp at Monday, March 28, 2011

Email ThisBlogThis!Share to TwitterShare to FacebookShare to Pinterest
Labels: grand lodge of indiana