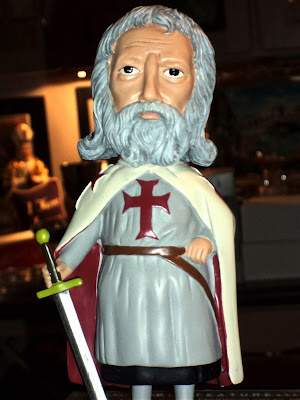 While the organization founded in 1919 by Frank S. Land that has become DeMolay International was officially formed on March 24th of that year, longstanding tradition holds that it is more appropriately celebrated on March 18th, the date of the death of Jacques de Molay in Paris in 1314.

Heck, even the French can't agree on the exact date of de Molay's burning—plaques at the site say both March 11th and March 18th.

I am proud to be an Honorary DeMolay Legionnaire, and happily celebrate the 92nd traditional anniversary of the founding of the Order of DeMolay in Kansas City, Missouri. DeMolay is open to young men between the ages of 12 and 21, with more than 1,000 chapters all around the world. Read the history of this tremendous group here.

I don't come from a Masonic family, and I never had the opportunity to join DeMolay as a young man. I wish that I had, and wholeheartedly recommend it to young men who seek a group in which to make new friendships, learn leadership and trust, and most of all, to fulfill a quest for the code of chivalry that has inspired the very best of men for centuries. That is no idle boast.

BTW, the Jacques DeMolay Bobblehead above was created by the lads of Pennsylvania DeMolay. Note the sneaky Pope lurking in the shaows to the left.
Posted by Christopher Hodapp at Friday, March 18, 2011

Email ThisBlogThis!Share to TwitterShare to FacebookShare to Pinterest
Labels: DeMolay