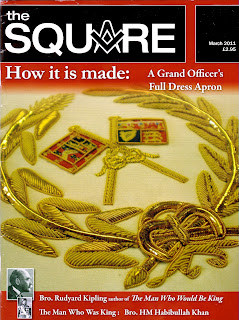 Thanks to Brother Richard Gan, editor of the UK's independent Masonic magazine, The Square for the kind mention of this blog in the March 2011 issue. And welcome to any new readers who may have first dropped by here because of it.

The new issue features articles about Brother Rudyard Kipling; the very real 'Man Who Would Be King,' Brother Habibullah Khan, Amir of Afghanistan; the creation of beautifully detailed regalia; Annie Besant and the formation of Co-Masonry; John Paternoster on Qabalah and the Secret Monitor; David Kibble-Rees on St. Thomas of Acon; Yasha Beresiner on Masonic summonses; a story on the formation of affinity lodges; and more. Every issue also contains a regular column for resolving Masonic questions and identifying collectables, Masonic philately, a regular debate of opposing viewpoints on a Masonic question, and reprints of Michael Halleran's "Brother Brother" stories that first appeared in the U.S. in the Scottish Rite Journal.
Posted by Christopher Hodapp at Monday, March 07, 2011