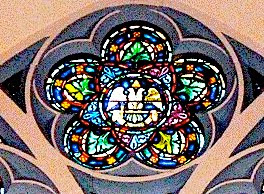 From ‘Great secret of the Adirondacks’ by Nathan Brown, in the March 26th Adirondack Daily Enterprise:

Saranac Lake's Methodist Church, at the corner of Church and St. Bernard's streets, was finished in 1927 and is loaded with symbols associated with the Freemasons and references to King Solomon's Temple, which is hugely important in Freemasonry and is what Masonic temples are meant to represent. These were apparently worked in by Freemasons who were members of the congregation at the time and involved in its funding and construction, according to the research of the Rev. Maggie McCarey, who has been pastor there for almost four years.

Michael Turmel is a 32nd-degree Scottish Rite Mason with Saranac Lake's Whiteface Mountain Lodge #789. One of his bachelor's degrees is in medieval and Renaissance history, and his master's is in classical archaeology, with a concentration in mythology and religion. He has been studying the symbolism in the church since he became aware of it a couple years ago. Turmel gave a presentation about the church's symbolism, at an open house at the lodge celebrating its 125th anniversary in spring 2010.

The article goes on to detail many of the hand-painted glass windows and other symbolism that fills the church. Some, like Solomon's Temple and Knight Templar imagery may be directly Masonic, York Rite and Scottish Rite. Not surprising, given the strong Methodist makeup of Freemasonry in the late 1800s and early 1900s. But it's hard to ignore the double headed eagle, clutching the sword, and the number 32 over its head.

Photo by Nathan Brown in the Adirondack Daily Enterprise.
Posted by Christopher Hodapp at Saturday, March 26, 2011