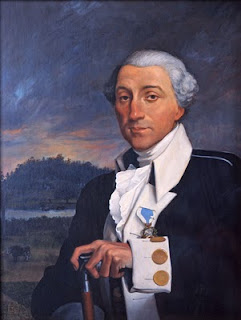 Okay, I owe an apology. In Freemasons For Dummies in a debunking of the myth that the "Masons" designed evil symbolism into the street map of Washington, D.C., I said that out of the men primarily involved in the design—George Washington, Pierre Charles L'Enfant, and Andrew Ellicott—only Washington was Freemason.

In Solomon's Builders, I pointed out that author David Ovason claimed in his 1999 book, The Secret Architecture of Our Nation's Capitol (aka The Secret Zodiacs of Washington, D.C.: Was the City of Stars Planned By Masons?) that both L'Enfant and Ellicott were Masons. In the case of Ellicott, he admits it was a hunch. But with L'Enfant, Ovason said his claim was based on an "unpublished manuscript," with no further citation.

L'Enfant was in New York City working on the renovations of Federal Hall between 1788 and Washington's inauguration in April 1789. In the hand-written minutes of Holland Lodge on April 3rd 5789 (A.L.), a "Major Francis L'Enfant" is listed as being proposed for membership. As the photos in the article attest, the first name was written as "Francis" and then crossed through. The hand-written manuscript is important, because the printed version of the minutes incorrectly listed the name as "Enfant, T.L."

Subsequent references show L'Enfant was elected on April 17th, and initiated on June 5th as an Apprentice. Nothing has changed in Masonry—immediately after being initiated, L'Enfant was jabbed with an officer's pike onto a committee, to redesign the ventilation of the lodge room. And as often happens with new members you thrust onto a committee, there is no record that L'Enfant ever came back again. It is well documented that he was ill-tempered and didn't play well with others, so there's no real way to know if he simply had no interest in continuing, or that the members of the lodge chose not to recommend him for advancement to the next degrees. Or that he just got steamed at being asked to do volunteer renovation work.

For non-Masons reading this, what this means is that L'Enfant was initiated into a lodge, but was never made a full member, which requires the Fellow Craft and Master Mason degrees. Likewise, in lists of Masonic U.S. presidents, Lyndon Johnson is generally not considered to be a Mason, as he was initiated in a Texas lodge as an Entered Apprentice, but never took the other two degrees required for full membership.

Regardless, my personal thanks to Brother Pierre F. de Ravel d'Esclapon for his detective work. As for those who will now trumpet this new evidence as stronger proof of the Masonic influence in the streets of the Federal City, please designate a driver. Do carry on and try not to hurt yourselves as you celebrate.

(Painting by artist Bryan Leister, based on a silhouette of L'Enfant and a pastel of the Major's father. It currently hangs in the District of Columbia Historical Society in Washington, DC.)
Posted by Christopher Hodapp at Tuesday, March 01, 2011