Yes, I have cancer. And you thought I was a Scorpio. 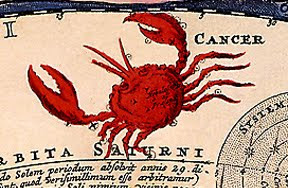 So, this guy walks into a doctor's office. "Doc," he says, "I've lost sight in my right eye, and I'm so anemic I look like the Michelin Man in a snowstorm. I've had some kind of test, scan or probe every day for going on three weeks now. I've even discovered that the big difference between a colonoscopy and an upper G.I. is the way the camera tastes. So what's wrong with me?"

The doctor says, "Do you want the good news, or the bad news, first?"

The doctor says, "Okay, you've got stomach cancer. The good news is, it's small, isolated, hasn't spread to any other organs or lymph nodes, and we can whack it with chemo before we hack it out, and you can get on with your life. And if you hadn't had the eyesight problem, we probably never would have known until it had really spread."

The guy's face goes as white as a big white thing. He says, "Wow. Uh, wow. Um, I think I'd like a second opinion."

Cue the audience for groans and titters of nervous laughter.

Honestly, after the past three weeks, I feel as good as anyone could feel after they've been told they have a live hand grenade inside of them. If left alone in a room for five minutes with nothing but a knitting needle, a bottle of bourbon and a flashlight, I swear I would have gone in after it myself, just to get rid of it.

So the straight story is this. I start chemotherapy a week from Monday, once they determine the toxic chemicals won't make me keel over from a heart attack. I'll be fitted for a stylish and futuristic chemo pump to wear for two months, which will make me a real hit at TSA checkpoints. I'll be on chemo for three weeks, then they will go in and machete out the tumor, followed by another three weeks of more chemo. After which I'll be my old curmudgeonly self again.

Cancer, schmancer. No one is measuring me for a box, and I refuse to let anyone buy a new black suit for me unless I reach my target weight on my own. As Woody Allen said, "I am not afraid of death, I just don't want to be there when it happens." So I'm taking a rain check for at least another 30 years or so, and I'm planning on being the patient from Hell.

All in all, an enforced rest is probably what I've needed for a while, but all things being equal, I'd much prefer getting a tan and sipping umbrella drinks on the French Riviera than getting strapped to a Barcalounger watching the Today Show with an IV stuck in my arm and my beard falling out. But as I recall, there's an old bromide about beggars and choosers.

The pragmatic side of this mess has been that I've had to cancel all speaking events in April. As I reported last week, I am indebted to Brother S. Brent Morris for stepping in for me in Albuquerque, NM next weekend. It's just too early in this process for me to know whether I can participate in the other engagements I have accepted in May or June. The doctors say it all depends on how this progresses, so I promise I will contact those folks privately as soon as I know what my next steps are along this rocky path.

Many, many thanks from both Alice and me for the literally hundreds of messages, emails and phone calls of good wishes, positive vibes, dirty limericks, prayers and offers of assistance. We are both truly appreciative of everyone's concern. More to the point, I am blessed to know so many people from literally all around the world, and I cannot tell you how humbling and strengthening your thoughts and prayers have been. They are much appreciated.
Posted by Christopher Hodapp at Friday, March 25, 2011