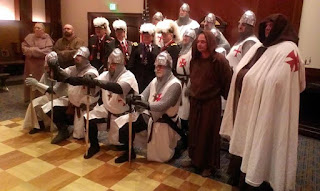 Levant Preceptory, Indiana's period costume Knight Templar team, will confer the Order of the Temple at the Dayton Masonic Center, at 525 W. Riverview Avenue in Dayton, Ohio at 12:30 PM on Saturday, July 18, 2015. We operate as a degree team under the charter of Indianapolis' Raper Commandery No. 1, but we draw members from all over Indiana. We travel to Indiana and surrounding states and confer only the Order of the Temple. Knights purchase their own regalia and take pride in excellence of work.

If you are in or around Dayton this Saturday, stop in and see us. When we cross swords with real steel broadswords, you'll know it!

Unfortunately, I am headed for a convention in New York and won't be able to attend this time. Good luck to all of my fellow Levant knights!
Posted by Christopher Hodapp at Friday, July 17, 2015 No comments:

English Masons Who Are City Councilors Must Declare Membership

From the Fenland Citizen today. I thought this madness was outlawed by the European Union Court on Civil Rights, but apparently England has found a loophole. Apparently it's no longer cops and judges who have to register their Masonic memberships, it's city council members. So it continues…

Cambridgeshire county councillors and officers could soon be expected to declare their membership of the Freemasons.

Leader of the council and March ward member Steve Count has submitted the motion.

The Standards Board for England has ruled that membership of the Freemasons must be declared under the councillors’ Code of Conduct.
Mr Count said the council does not currently have a written requirement for Freemason membership to be declared and is not expecting any opposition to the motion.
He said: “Quite a few people have said over the years that they are Freemasons. They are not fazed by that fact being revealed.
“I think that the public would like to know that we operate in a transparent way.”
Mr Count’s motion, which will go before the next full council meeting on Tuesday, July 21, calls for all councillors and senior officers to include their membership on the register of interest.
It also calls for councillors and officers to declare if their spouse is a member of the organisation.
Posted by Christopher Hodapp at Friday, July 17, 2015 2 comments:

Are you looking to improve your Masonic speeches? The Masonic Service Association has prepared a new Masonic Speaker Kit, pulling together 8 useful publications into a package to provide savings for users. Bring your Masonic remarks to a higher level and add confidence to your speaking opportunities. See details at www.msana.com 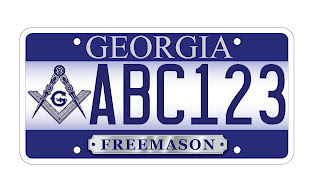 Worshipful Brother Brian Germann in Georgia tells me that Masons there are trying to get Masonic license plates for their state. So far, they have only gotten 350 orders. Come on, Georgia brethren! The state only requires 1000 orders to put the plates in production. There aren't 1000 brethren out of nearly 40,000 Georgia Freemasons willing to spend a couple of extra bucks to show their pride in the fraternity? Proceeds go to the Georgia Masonic Charities Foundation, as detailed on the order form available here: http://glofga.org/files/msptag.pdf With a thousand plates, that's an extra $10,000 to the Foundation every year, pretty painlessly.

Freemason tags are a great way to get our fraternity in front of the eyes of the community every day, and dozens of states are successfully doing this every year.
Posted by Christopher Hodapp at Wednesday, July 08, 2015 7 comments: 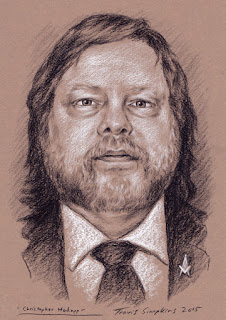 A gentleman named Travis Simpkins sent me a note today that contained praise for Freemasons For Dummies, along with a sketch he made of me. He said he is going to petition a lodge at the end of the summer (apparently they're 'dark' in July and August).

I have received literally hundreds of messages like this over the years saying they read the Dummies book and can't wait to join, which is always a deeply humbling experience for me every time it happens. But this is the first time someone has made a portrait of me to go with it.

I told him that he had real talent if he could make me look good...
Posted by Christopher Hodapp at Thursday, July 02, 2015 No comments: