Back in October 2010, the assembled members of the Grand Lodge of Kentucky at their annual communication voted against legislation that would have banned openly gay men from joining Kentucky lodges. The controversy centered around WBro. John Wright. When Wright joined his lodge in 2007, he was married. In December 2009, he was elected to serve as the Master of his Winchester lodge. Wright and his wife subsequently filed for divorce in March 2010 because he realized he was gay. In May, when some members of the Masons found out, "news of my sexual orientation spread ... like wildfire," he said.

From "Membership of openly gay Mason being challenged" by Valarie Honeycutt Spears in today's Herald Leader: 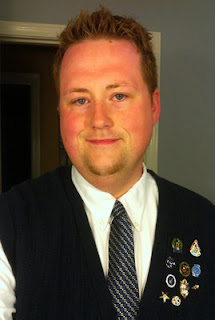 Last year, after John Wright told members of Right Angle Lodge in Winchester that he was gay, members of a lodge in Frankfort tried to change the Kentucky Masons' constitution so that openly gay men could not be members.

But in October, Masons at a statewide meeting turned down the proposal. At the time, Wright told the Herald-Leader he saw the vote as a sign that Masons in Kentucky would not discriminate against gays.

Now, Wright is facing a Masonic trial set for April 8, according to a letter from an official in the fraternity's administrative body, the Grand Lodge of Kentucky. Within weeks of the statewide vote, five Masons from Central Kentucky filed an internal petition, saying that Wright violated the group's constitution by forsaking his belief in God in declaring his homosexuality and by going public with information about the Masons.

Wright, a student at Eastern Kentucky University who also works for a military defense contractor, was Master of the Right Angle Lodge from December 2009 until December 2010, and he said this week that he remains a member. The Masons are said to be the world's oldest and largest fraternity.

Wright provided letters and other documents involving the complaint to the Herald-Leader.

In a Dec. 6 letter, Kentucky Grand Secretary Joseph R. Conway told Wright that Mason John C. Bourne, a member of a Nicholasville lodge, had filed an internal complaint alleging that Wright had engaged in "unmasonic conduct."

Bourne, a detective with the Jessamine County Sheriff's Department, declined to comment on the petition, which was also brought by four other Masons. Others who backed the complaint include: Dennis R. Gambrell and Doyle G. Rambo, members of two separate lodges in Lexington; Andrew R. Dixon, a member of a Versailles lodge; and Robert D. Roach, a member of a lodge in Lawrenceburg. All four men declined to comment about the petition.

When Wright became a Mason in 2007, he was married. Wright said he and his wife filed for divorce in March 2010 because he realized he was gay.

The complaint said Wright's behavior went against the Masonic constitution because he "violated the sanctity of his marriage" and "deserted her due to his homosexuality."

Another charge alleged that Wright revealed "privileged Masonic Communications ... to the non-Masonic world."
In a Feb. 9 letter to Wright, Conway said an investigative committee found probable cause to believe that Wright may have revealed privileged Masonic information and that he may have violated "his oath and obligation" by engaging in other relationships prior to the finalization of his divorce.

The complaint also alleged that Wright had violated the group's constitution because he had "openly forsaken his belief in God ... by refusing to obey the Moral Laws in declaring his homosexuality which the Moral law declares as an abomination to the law of God."

On that issue, the committee found "no probable cause," Conway's letter said.

Reached at the Grand Lodge of Kentucky headquarters in Jefferson County, Conway declined to comment about the charges.
In a March 15 response letter to Conway, Wright said he did not disavow his belief in God, divulge privileged Masonic communication or violate the sanctity of his marriage by divorcing his wife.

Wright said recently that after the vote in October, many men were upset that he was allowed to continue as a Mason.
"Personally, I feel these charges are retribution for speaking out about the discrimination that I experienced," he said.

"In my heart, I feel that if I had left my ex-wife for another woman, nothing would've been said to me about it, nor would I have been brought up on charges," Wright said. "I know of many Masons in Kentucky who have been divorced and re-married, some several times, and charges were never brought against them for abandoning their spouse by causing a divorce action to be filed," Wright said.

According to the group's constitution, if Wright is found guilty at a Masonic trial he can be admonished, reprimanded, suspended or expelled.

WBro. Wright has posted his official response to the Masonic charges here.
Posted by Christopher Hodapp at Thursday, March 24, 2011