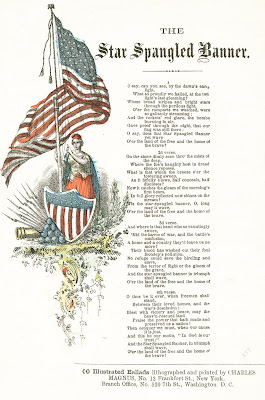 Gene Weingarten's column in today's Washington Post is an occasionally funny whack at the national anthem. Few think the "Star Spangled Banner" is as inspiring, catchy or as easy to sing as "America," and it's no real crowd pleaser like Brother Sousa's "Liberty Bell." But it's tradition, dammit. And he is right on one big count: it could be a whole lot worse.

From "Below The Beltway":

I’ve lately been listening to dozens of foreign national anthems to try to understand why ours is so bad. I now know ours could be a lot worse.

I began this hideous chore after watching the Super Bowl, where Christina Aguilera performed an electrifying, throaty, sultry, unforgettable butchery of the lyrics of “The Star-Spangled Banner.” After eliminating the ramparts entirely, she sang — and I quote verbatim — “what so proudly we watched at the twilight’s last reaming.”

Still, even when sung correctly, our anthem is a mess: 15 dangling clauses that seem more or less mix-and- match interchangeable (Oh, say! can you see / through the perilous fight / o’er the land of the free / by the dawn’s early light . . . ), all of it amounting to a single, convoluted question that is then . . . not answered.

Does the flag still wave? As yet undetermined! The answer doesn’t arrive until the second stanza, which no one knows because it is mostly sung in creepy, hyper- patriotic gatherings of, say, ladies who are direct descendants of Cotton Mather, or during secret Masonic initiation rites involving men wearing aprons.

Rest of the column.

I promise we don't sing the second stanza in Masonic lodges in Indiana.

We sing the fourth.
Posted by Christopher Hodapp at Sunday, March 06, 2011