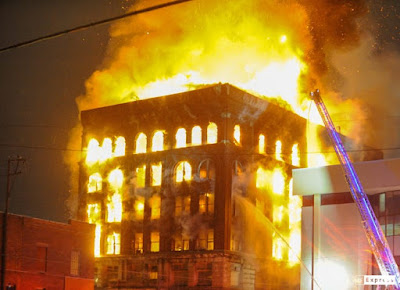 (Photo: Times-Republic)
by Christopher HodappThe historic Masonic Temple in downtown Zanesville, Ohio was gutted by fire last night, and numerous nearby buildings and businesses were ordered to be evacuated (including the Muskingum County Jail's 100 prisoners).
Fortunately, there were no injuries or fatalities reported.
According to stories in the Zanesville Times-Republic, no statement has been made concerning the source of the blaze, whether it was accidental, faulty wiring, or deliberately set. With the rising number of Masonic lodges being the target of arsonists all over the world, that's a vital bit of business to discover.
Firefighters were called at about 11:00 PM, but the fast-burning flames spread quickly. Although the brick and limestone exterior survived the devastating blaze, the interior floors were almost completely destroyed.
The Temple was opened in 1901 and has been the longtime home of Lodge of Amity No. 5, along with York Rite groups and other appendant organizations. But the Temple was also an important place to the wider community. Between 50 and 60 artists have rented studio space in the Temple for many years. Other renters included a law firm, property management agencies, and a bail bonds agency. Its 7-story height made it the tallest building in the town. 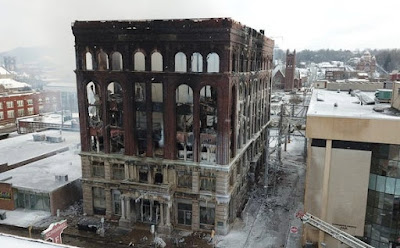 (Photo: Times-Republic)
Because the entire structure was completely gutted, it now poses an immediate danger to people and nearby business if it collapses. Zanesville fire department officials have ordered the Temple to be demolished - possibly as early as this weekend.
On Saturday, the first ever Zanesville Arts Walk was to have taken place, with much activity around the Temple artists' studios.
Amity Lodge No. 5 is one of the first five Ohio lodges that formed the Grand Lodge of Ohio in 1806. The lodge sold the Temple building several years ago, but continued to lease their lodge rooms from the new owners. Bill Hosler reports that the lodge had officer's jewels made by Paul Revere on display, as well as the military sword belonging to Rufus Putnam of American Union Lodge No. 1. No word as yet as to the fate of those items.
Posted by Christopher Hodapp at Friday, January 07, 2022 No comments:

Fire at Grand Lodge of Ireland in Dublin 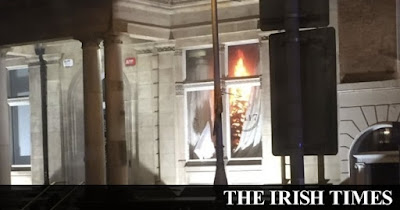 by Christopher HodappNOTE: This story has been updated to include a statement from the Grand Lodge of Ireland.
The Irish Times and other sources are reporting that a fire broke out at the historic Dublin headquarters of the Grand Lodge of Ireland this evening (New Years Eve) at about 5:30 PM local time on New Years Eve. The building was supposed to be empty at that time, and fire officials suspect arson.
Witnesses said that a man in his 30s was seen climbing through a broken window into the building and setting fire to a Christmas tree that was displayed in the building's library. The fire brigade arrived at 5:40 and quickly extinguished the blaze. 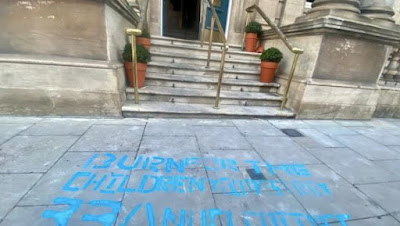 A bizarre anti-vaccination message was also painted on the sidewalk outside.
From the Irish Times:

The graffiti is understood to be reference to mRNA, the technology used in some Covid-19 vaccines.
The Grand Lodge of Freemasons of Ireland grand secretary Philip Daleydescribed the attack as “very serious” and “completely out of the blue”.
However, he said there had been previous demonstrations outside the hall and other Masoni halls in Ireland by anti-vaccination campaigners.
“The view is that we created the virus and we are part of the new world order and we have to be stopped. It’s ridiculous stuff,” he said.

An unidentified man was hospitalized with spinal injuries after falling at the scene. No one is saying yet whether this person is under suspicion for the blaze, or merely an innocent bystander. 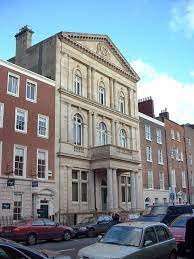 The magnificent Freemasons Hall on Molesworth Street in Dublin has been the home of the Grand Lodge since 1860. While the fire was mostly contained to one room, the library is the perhaps the worst of all possible places to be damaged.
UPDATE: January 4, 2022, 3:40PM
The following statement was issued this morning by the Grand Secretary for the Grand lodge of Ireland:

Dear Brethren,
Thank you for the many emails, texts, and calls offering support and assistance following the arson attack at Freemasons’ Hall. It is impossible, at this time, to reply individually due to the large volume, however we really appreciate your support.
The insurance assessors have been working over the weekend to assess the damage, but it will take some time to complete this. Our first objective is to get Freemasons’ Hall open and operational. It is hoped that electricity and gas will be restored within the next 24 hours and the clean-up has commenced.
Although the damage is extensive, it is repairable, and work will commence over the coming weeks. The books and the paintings in the café / library have suffered smoke damage and a plan is in place to protect them prior to restoration.
I would ask for your patience in dealing with administrative matters at this time. It may take a little longer to get a reply as our computers and telephone services have not yet been restored.
Sincerely & fraternally,
Philip A.J. Daley
Grand Secretary

Meanwhile, two photos of some of the interior damage to the library and cafe have been circulated on Facebook without attribution. If anyone knows who took these images, let me know and I'll add their credit. 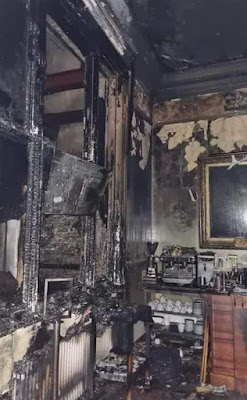 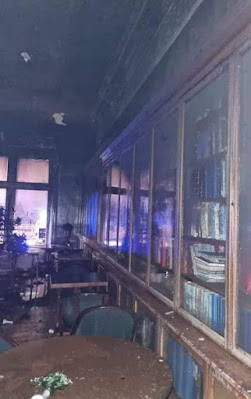