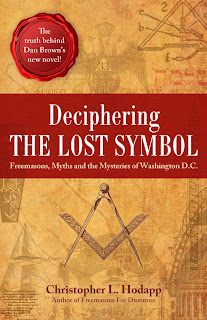 Any author who bothers to respond to a lousy review of one of his books always risks looking like a disgruntled brat, but Deciphering The Lost Symbol has gotten two smackdowns in Masonic magazines in the last month, and I have to take exception to both.

Brother William A. Parks, Jr. in the February 2011 Virginia Masonic Herald (Vol. 104) Web Supplement, apparently found absolutely nothing of value in the book. Parks' review is notable in one respect: it is the first one any of my books has ever received containing the word "hemorrhoid."

I normally don't mind when someone reviews my writing like a pigeon reviews statues, but in his enthusiastically swingeing attack on my perceived errors, I guess he missed the part in the introduction where I clearly said Dan Brown's novel The Lost Symbol was overwhelmingly positive about the fraternity, that Brown used dramatic license for the advancement of the plot, and that my intention was to point to where Brown was both wrong and right about details about Freemasonry. I also clearly speculated at the end that Brown perhaps intentionally did not use accurate Masonic ritual out of respect for the fraternity.

We can joust all day long about whether I went too far in discussing details of Masonic ritual, as it is a matter of opinion, as well as Masonic jurisdiction. I referred to what I believe are the historic sources Brown used for his descriptions of our ceremonies, and not necessarily the current ritual in use in any given jurisdiction. I tried to walk a fine line in order to clarify or rebut what Brown had written, without being too coy on the one hand, and too detailed on the other. As to Parks' offense over the hailing sign, that particular cat was let out of the bag by numerous members of the mainstream press two months after Brown's Da Vinci Code hit the stands. It was a major clue on the book jacket that Brown's next novel would be about Freemasonry, and it would have been intellectually dishonest to ignore the reference. 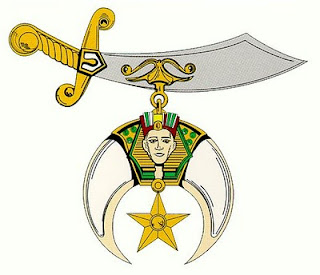 Brother Parks states that I am wrong in saying that the pyramid does not appear in symbolism of the AAONMS (Now Shriners International). He quotes, "The emblems and jewels [of the Shrine] are the characteristic insignia of the Oriental Nation from which our Order emanates. They are the Crescent, Pyramid... The gold band [of the crescent] should be decorated with a sphinx head on one side, a pyramid with an urn upon the other..."

Perhaps so. However, the official emblem of the Shriners International today is a crescent made up of two Bengal tiger claws, united by a keystone in the center, containing the head of a sphinx. Beneath the crescent hangs what is described generally as the Star of Bethlehem. All of this dangles below a scimitar. There is no pyramid, as can clearly be seen in the logo on the website for Kazim Temple in Brother Parks' home town of Roanoke, VA.

The name of the 6th degree in the Scottish Rite SJ, in both Pike's Morals & Dogma and in the 2006 edition of Rex Hutchens' A Bridge To Light, is "Intimate Secretary." I failed to notice that the new name is now apparently "Confidential Secretary," as it appears in the 2008 Scottish Rite Ritual, Monitor and Guide. Those of us in the Northern Masonic Jurisdiction are used to our degree names being changed on us at the drop of a hat, but we are generally told up here that the SJ doesn't normally engage in such antics.

Speaking of the NMJ, Brother Tom Jackson over in the Scottish Rite NMJ Northern Light February/March 2011 issue takes a couple of big swipes at me for being, not necessarily incorrect in certain assertions, but simply being too inexperienced in Freemasonry to write about it. He took much the same dig at me back in 2005 when he reviewed Freemasons For Dummies. Now, Tom and I have spent time together and we get along fine with each other. He was kind enough to invite me to speak at the Pennsylvania Academy of Masonic Knowledge last year. He and I have spoken onstage at several Masonic gatherings, and we simply have different outlooks about the future of the fraternity. But he seems to want every book I write to contain the disclaimer, "Discussions of Masonic practices in this book are true almost everywhere in the United States. Except in the Grand Lodge of Pennsylvania."

Brother Jackson does state at one point that the term VITRIOL "has no Masonic significance." Perhaps not in Pennsylvania or other regular U.S. jurisdictions, but in other jurisdictions and Masonic obediences it most certainly does. He wraps up the review by saying, "Great difference between error and simply lacking knowledge." I'm not sure which this is. Either way, while it is not a 'Masonic mantra' as Brown says in his novel, in my experience, I have seen it written on the walls of Chambers of Reflection in two cases outside of the U.S.

Concerning any factual errors in the text, they are all mine and I accept all blame. The book was written to a deadline dictated by the publisher in just four weeks, in a rush to get it quickly on shelves. I was perhaps suicidal to agree to such a schedule, but that's the breaks when dealing with a non-Masonic publisher and an eager marketing department. However, I will see to it that any notable errors are corrected in future editions.

Except that stuff about Pennsylvania.
Written by Christopher Hodapp at 3/03/2011