AFP is reporting that ousted Liberian president Charles Taylor, currently on trial for war crimes, was asked yesterday about human skulls being displayed at checkpoints in Liberia during his 1989-90 revolution.

Oh, those old things? Why, it was just like a Masonic lodge.

"Skulls were used as symbols of death," he told judges of the Special Court for Sierra Leone trying him on 11 counts of war crimes and crimes against humanity stemming from the 1991-2001 civil war in the neighbouring state.

"These were not our people. Enemy soldiers had been killed and their skulls were used. I knew that, and it did not bother me."
The skulls were of soldiers killed in clashes with Taylor's National Patriotic Front of Liberia (NPFL) which invaded the country from the Ivory Coast in 1989 to oust his predecessor, president Samuel Doe.

Taylor sought to draw a distinction between human skulls and fleshed human heads, calling it "a blatant, diabolical lie that I, Charles Ghankay Taylor or anyone would drive by a human head.

"These were only skulls that I saw and I would not have tolerated anyone killing and putting a human head up," he told the court. The 61-year-old testified that skulls were displayed to convey the message that "if you do wrong, this is the result."

Taylor argued that the skull was still used as a symbol by "western fraternal organisations".

"I saw them (at the checkpoints), I investigated... and came to the conclusion it was not anything wrong. I had also seen skulls in fraternal organisations that are western, I did not think there was anything wrong with a skull.

"We are not talking about skulls lying around all over the place", he added, but only "at certain strategic junctions."
Taylor denied, however, having ordered the skulls to be put up. 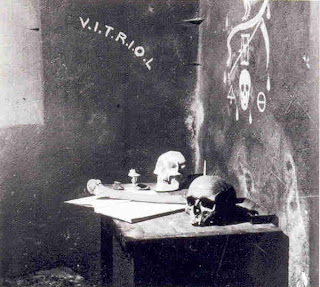 Although we don't, as a general rule, go shoot up a lodge of Odd Fellows, Knights of Pythias, Knights of Columbus or Elks to get ours. We usually just order the plastic ones.

I am not trivializing this story. In case you don't know anything about the real horrors of the civil war in Liberia, read it here. An estimated 250,000 out of a country of 3 million were killed, and stories about troops eating human hearts and playing soccer with human heads became common.
Posted by Christopher Hodapp at Thursday, July 16, 2009