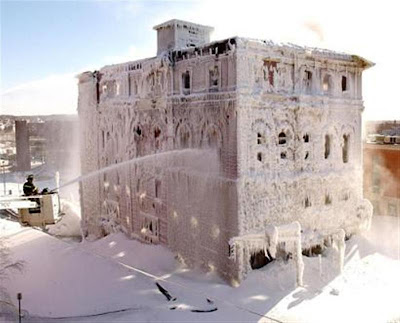 If you saw the photo back in January 2004, the image of Bangor, Maine's burned and ice-covered downtown Masonic building doubtless has remained a vivid image in your memory. The 1868 building was a total loss and was pulled down the day after the fire. For 5 1/2 years, the Masonic bodies of Bangor have been nomads in search of a new home. 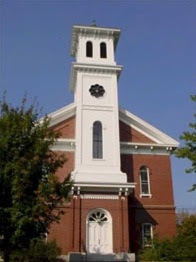 On Tuesday, the Bangor Masonic Foundation announced that it has purchased Wellman Commons, the Beach Chapel and the Ruth Rich Hutchins Center that connects them on the former Bangor Theological Seminary campus. The Foundation paid $500,000 for the historic property, and it will be home to Rising Virtue Lodge No. 10, AF&AM St. Andrew’s Lodge No. 83, AF&AM the York Rite Masonic Bodies; the Scottish Rite Bodies; the Order of the Eastern Star; the Bangor DeMolay; the Bangor Rainbow Girls; and the Scottish Rite Learning Center. The Masons join a thriving community already on the campus, which is already home to a public library, a local theatre, and apartments that will become assisted living units.

Plans had been underway to build a new 19,000 square foot, $3 million facility, but the faltering economy and rising construction costs forced a change in direction. The result was this purchase of an historic property with 50% more space and architectural details no new building could compete with.

From the article in the Bangor Daily News:

Since the fire, the more than 2,000 men and women in Masonic groups have met in rented spaces in the Bangor area, according to Chapman. Meetings are scheduled to be held in the new buildings beginning in September.

Bangor Mayor Gerry Palmer said Tuesday that he was “tickled pink” about the sale.

Jane Bragg, who was a member of the seminary’s board of trustees when the property was sold, said she approved of the sale of the buildings to the Masons.

“It is a Christian organization and a nonprofit,” the owner of Thomas School of Dance in Bangor said Tuesday. “It’s good to know the facility is going to be maintained because of the historical and architectural relevance of the buildings.”

The Masons plan to do some renovations to the buildings. among them turning the chapel into a lodge hall, Chapman said. The dining room and kitchen will continue to be available to nonprofit groups such as the Bangor Rotary, which meets in Wellman Commons at noon Tuesdays.