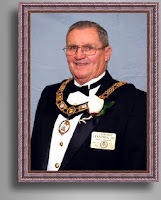 I received a message today from the Grand Master of Georgia, J. Edward Jennings, Jr., in response to my request for more information directly from him. (He sent me a correction afterwards, and I have revised his response to make that correction):

"The situation with the Grand Lodge of Georgia and Gate City Lodge No. 2 will be addressed in a statement I will make public in about 10 days.

"The statement you sent me from the brother in Atlanta concerning John Holt is incorrect. As Grand Master of Masons in Georgia, it is my duty to appoint Brothers to positions in Grand Lodge, such as District Deputies, who keep me informed of all things in their sub-districts, that I may be better informed of all situations that may need my input. I felt that I had not been kept informed, not only of the incident with Gate City Lodge No. 2, but with other situations also. This particular District Deputy had made comments in a tyled Lodge meeting stating things that I supposedly had said, comments that simply were not true. As Grand Master, I have to have Brothers on all appointed committees of Grand Lodge to do the best job possible. I felt that this was not happening from this particular District Deputy and I asked him to resign. There is no hard feeling on my part toward John; I am only doing the job I was elected to do. At the same meeting where he resigned, John he told me that he was proud that I presented him his 50-year certificate and that if he lived long enough that he wanted me to present him his 60-year award, which I told him I would be honored to do. It is true that John is a White Cap Scottish Rite Mason and has done a great job in the past, both in the Scottish Rite and the York Rite, and that he has spent eleven years as a District Deputy, but there comes a time when things must change and that time had come. John is still a friend of mine and I look forward to spending time with him in both Scottish and York Rite meetings.

"Do not believe all the information you receive on the internet, for much of it is biased and untrue. The best source of information is from "the horses mouth", and I trust that what I have related to you will satisfy your curiosity in these matters."

Many thanks to Grand Master Jennings for taking the time to respond. I encourage everyone to wait patiently for his public statement on Gate City Lodge, and not to speculate.
Posted by Christopher Hodapp at Saturday, July 11, 2009