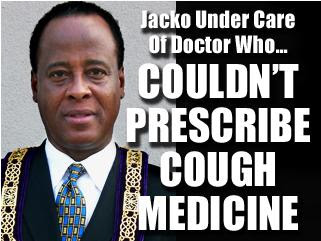 It seems that Jackson's live-in doctor, Dr. Conrad Murray (left), who is at the center of the controversy over drug injections, is alleged to be a Freemason.
According to a Fox News report:

The money was one of the main reasons Murray decided to go on tour with Jackson, says Rev. Floyd Williams, 80, who is Murray's friend and patient. Murray had developed a booming concierge business — he was jetting off to see patients in New York and Washington while building his practice in Las Vegas. Three years ago, Murray joined the Freemasonry (sic), the international fraternal society that dates back to the early 17th century. His friends say this new network galvanized his growing side business.

Note what appears to be a Masonic officer's collar resting on Murray's shoulders. No knowledge at this time whether he is a member of a mainstream lodge, a Prince Hall lodge, or one of the literally hundreds of irregular, unrecognized "grand lodges" that are scattered around the country. (The Prince Hall research group, the Phylaxis Society's Commission on 'bogus' Freemasonry lists at least 8 irregular, unrecognized "grand lodges" with Las Vegas addresses). No one knows yet, but I'm certain the world's news organizations are hot on the trail.
So, welcome to all of you folks swooping in here who have Googled "Freemasons killed Michael Jackson!" in search of the Masonic conspiracy. And members of the press, please, buy my book. If everybody else is going to cash in on Jackson's death, I might as well reap a little pelf as well.
(Photo from the Fox website) 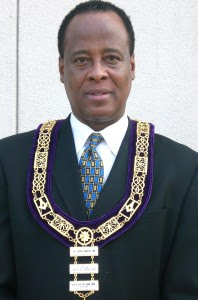 UPDATE 7/30
Murray's attorney Ed Chernoff has released the full photo of the doctor in his Masonic collar, with a caption reading "Dr. Murray has been a Freemason for three years" on the law firm's website. But after several weeks since this story broke, no one in the mainstream or Prince Hall Masonic community has been able to determine his membership.
Posted by Christopher Hodapp at Monday, July 06, 2009