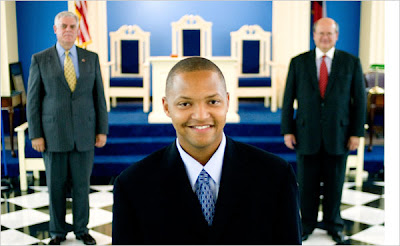 In spite of the Masonic charges being withdrawn against Gate City Lodge No. 2 in Atlanta, the story has hit the New York Times in Friday's edition:

The story does bring out several points missed by other articles, rumored by others close to the situation, but never attributed in print. Brother Marshall is actually the second black member of Gate City, although he has been the lightening rod of the controversy. (What concerns me more than anything else on a personal level about this story is the position it has placed Brother Marshall in. I'm certain he simply wanted to be a Mason in Gate City, not a court case or a test of tolerance.)

The other aspect of the story has to do with Prince Hall recognition. According to the NYTimes article:

Five or six years ago, the Prince Hall Masons in Georgia approached the mainstream Masons about recognition, said Ramsey Davis Jr., Grand Master of the Prince Hall Grand Lodge in Riverdale, Ga. But the group was not interested, Mr. Davis said.

“There’s deep-rooted racism in the leadership,” he said. “I’ve had many calls from white Masons to say they cannot understand why things are this way.”

The story has been picked by The Guardian in Britain.