Old Navy and the Scottish Rite? 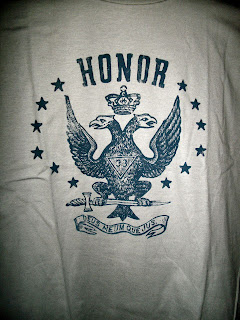 Several brethren have remarked on this on some of the various forums, but I wanted to wait until I got my very own.

It seems that Old Navy has inadvertently become a recruiting tool for the Scottish Rite. Check out the new shirt design, featuring the crowned double-headed eagle; the shield with the number "33"; the motto Deus Meumque Jus (God and My Right); the sword clutched in its talons. Who knows whether Old Navy's art director knew the real source of the clip art he was cribbing? Whether he did or not, the addition of the word "Honor" makes a nice touch for those who know it to be what it is. I suspect the company's art people were simply looking for a cool symbol that would part the average American teenager from $19.95. Mine came in "urban dwelling gray." Also available in "black jack" and "red velvet." Soon to be in high schools everywhere.

And just by sheer coincidence, it happens that it's the same artwork appearing on the wax seal on the cover of Dan Brown's Da Vinci Code sequel, The Lost Symbol.

Curiouser and curiouser.
Posted by Christopher Hodapp at Monday, July 27, 2009