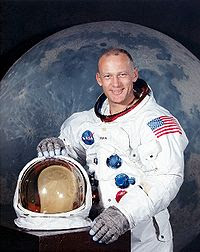 So, here's to the three bravest men in the universe, Neil Armstrong, Buzz Aldrin and Michael Collins and the greatest moment in human history. It will never be equalled in my lifetime, not because men can't achieve such things anymore, but because society has lost the vision to try. The most stirring human achievement we seem to able to muster up these days is Richard Branson assuring the world his Virgin Galactic space tourism program will be "carbon neutral."
Posted by Christopher Hodapp at Monday, July 20, 2009