276 Years of Freemasonry in Massachusetts 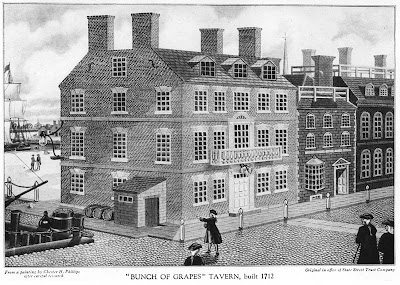 On July 30, 1733, a group met at the Bunch Of Grapes Tavern in Boston, and formed what was appropriately named First Lodge No. 126 (now St. John's Lodge—Massachusetts does not number their Masonic lodges). It was, in fact, the first lodge in America that the Grand Lodge had authorized (unlike earlier lodges that existed in Pennsylvania), and Price’s position as "Provincial Grand Master of New England and Dominions and Territories thereunto belonging" gave him the sole right to charter new lodges in the Colonies.

A replica of the sign that hung over the door of the Bunch of Grapes tavern was carved from a block of wood from the U.S.S. Constitution and now hangs in the Grand Lodge building in Boston.

From the National Heritage Museum blog:

London-born Henry Price apprenticed as a tailor. He arrived in Boston in 1723 to pursue this trade and soon met with success, opening multiple shops. He had become a Freemason in England prior to 1723. In 1733, while in England on business, he approached the Grand Lodge of England with a petition signed by 18 Boston men seeking to form a Masonic lodge. This petition was granted. Price returned home to Massachusetts, where he constituted both the Grand Lodge and St. John’s Lodge, the oldest local lodge in the state.

In the early 1760s, Henry Price retired to Townsend, Massachusetts, where he served as representative to the Provincial Legislature in 1764 and 1765. His several-hundred-acre estate, which included farms, mills and mechanical shops, reflected his prosperity. On May 14, 1780, while splitting rails on his estate, Price’s axe slipped, wounding him in the abdomen. He died six days later, at the age of 83.