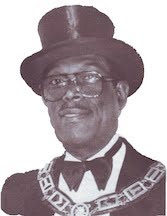 M:.W:. Past Grand Master Fred D. Parris 33° of the Most Worshipful Prince Hall Grand Lodge of New York was murdered on Sunday, December 12th in Barbados. Brother Parris was 90 years old, and was found stabbed to death on Brighton Beach, St. Michael, Barbados.

He served as a director of New York's Harlem Hospital for 25 years, and was elected as Grand Master in 1995. He lived in the U.S. for 35 years. Parris was the son of the first black captain of police in Barbados, and he retired back to the island ten years ago.

Preliminary investigations into the death of 90-year-old Fred Parris have ruled out robbery, and police sources have indicated the Stanmore Crescent, Black Rock, St Michael senior citizen received several stab wounds about the body, including to the neck, stomach and back.

Parris’ body was found about 5:30 a.m. lying in a small track leading to the popular beach. He was dressed in a short bathing pants and shirt.

Distraught family members who gathered at the scene shortly after the incident reckoned their loved one might have lost his life because he witnessed some sort of illegal activity in the area.

Nicholas Harrison, one of Parris’ nephews, said he could see no other motive for his uncle’s killing, since he (Parris) was carrying no personal possessions when he met his death.

“Going to the beach was an every morning passion for my uncle, except on Sundays when he would go to church,” Harrison said.

He added that Parris did not even wear a watch while going for his daily sea bath and noted that he (Parris) even hid his house keys outside his home before going to the beach.

Brother Parris would have turned 91 in January. His death was untimely, and his brethren mourn.
Posted by Christopher Hodapp at Wednesday, December 15, 2010