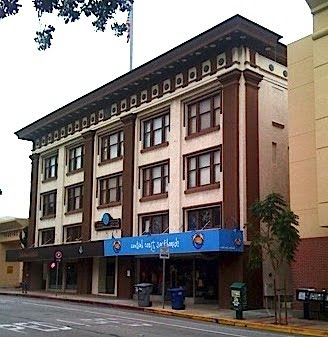 The brethren of King David's Lodge No. 209 in San Luis Obispo, California have made a strong commitment to their 1913 Temple building. Over the last year, they have spent $70,000 restoring the facade to its original look. (The photo above is the "before" image. Pictures speak a thousand words. Someone please send along a new "after" view, as I can't find one online.)

The wood-framed building, known in recent years for its long-term commercial tenant, Law’s Hobby Shop, and now for occupants Founder’s Community Bank and Central Coast Surfboards, underwent a modernization in the mid-1970s.

In 2009, the awning above Law’s Hobby Shop was torn down in anticipation of the construction project.

The new pediment is a neoclassic arch reminiscent of the 1913 facade.

The $70,000 project was paid for with rental income collected by the lodge from its tenants.

The entire building was built in 1913 for $57,093.16. More to the credit of the members of the lodge, it was debated in the 1970s whether to sell the building and more to the suburbs. Greater vision prevailed, and it remains an important part of the downtown area.

In 2005 Estero Lodge No. 719 in Morro Bay consolidated with King David's Lodge. According to their website, the lodge helps tutor children from the local elementary school, along with recognizing police and fire fighters for their service throughout the year.
Posted by Christopher Hodapp at Wednesday, December 29, 2010