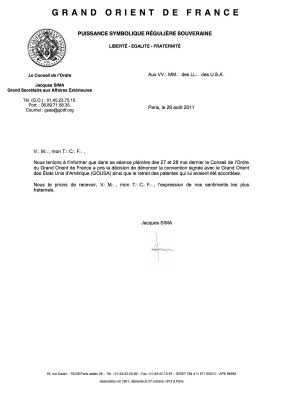 I've heard the rumor for months, and reported it back in June, but I finally have the actual letter in hand. On August 29th, 2011, the Grand Orient of France issued the following letter concerning the fledgling Grand Orient of the United States of America:

We wanted to inform you that in its plenary session on 27 and 28 May the Council of the Order of the Grand Orient of France took the decision to terminate the agreement with the Grand Orient of the United States of America (GOUS) and the withdrawal of the licenses that had been granted.

It is signed by Jacques Sima, Grand Secretary of External Affairs.

Thus ends any serious claim of cooperation between the GOF and the GOUSA.

I have also received documentation that shows the GOUSA's claims of having a lodge in Washington, D.C.—Benjamin Franklin Lodge—are false (I have seen tax forms from its legal owner), along with their continued claims of amity with the GOF.

Perhaps at long last this distraction of deception and chaos can finally come to an end.

Stand by for the flurry of angry denials from the Halcyon boyz...