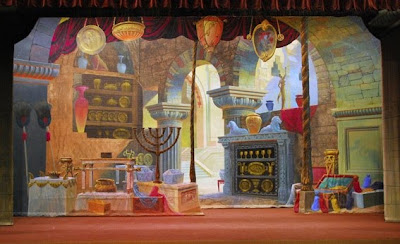 The Scottish Rite Valley of Nebraska is working to have its auditorium renovated by 2014, in time for the centennial celebration of the building. As part of the fundraising, they are selling theatre seats, with a small name plaque attached with the name of the donor.

Phase 1 was completed in early October 2010. The old seating and flooring was removed to make way for a new oak floor, new seats, sound-deadening insulation of the stage and flooring. A new sound and lighting booth was built and the ground floor of the auditorium was repainted. Phase 2 will include completion of painting over balcony and open floor area, and new lighting.

Back in 1994, the Valley purchased 25 historic backdrops out of the Northwest Kansas Valley in Kansas City, Kansas when they sold their building. The beautiful drops were originally created by Carlos Dubois for the Great Western Stage Co. in Kansas City, Missouri between 1951-53.

Check out the slide show of the Scottish Rite backdrops here.

In 2000, the Valley remodeled the first floor of the 47,000 square-foot building, enlarging the offices, adding an improved dining room and lobby matching the décor in the upper floors. The kitchen was modernized, as well. In 2002 the 2nd floor was renovated adding period-appropriate lighting, along with a serving kitchen, and a new lounge featuring a working a fireplace and a bar. Take a virtual tour of the building here.
Posted by Christopher Hodapp at Sunday, December 19, 2010