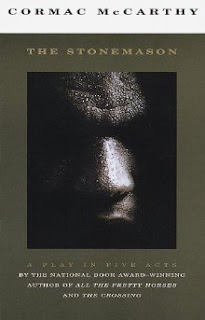 I just finished reading Cormac McCarthy's 1994 play, The Stonemason. McCarthy won the Pulitzer for his book, The Road, and is also the author of the novels, No Country For Old Men, The Crossing, and more. His work is evocative and is often compared to William Faulkner.

In The Stonemason, McCarthy tells the story of four generations of the Telfairs, a black family in Louisville in the early 1970s. Papaw, the 90+ year old patriarch, is a stonemason, and he has passed the craft down to his son, and to his grandson Ben, who narrates much of the story. The construction of the play is unual, and it is rarely staged. One actor portrays Ben onstage, while another periodically appears off to the side as the voice of Ben's diary.

Much of Ben's narration concerns his grandfather's philosophy of the stonemason's craft, and he makes several references of interest to Freemasons:

Anything excellent is always rare.
p. 8

The trade was all they had, the old masons. They understood it both in its utility and in its secret nature. We couldn't read or write, he says. But it was not in any book. We kept it close to our hearts. We kept it close to our hearts and it was like a power and we knew it would not fail us. We knew it was a thing that if we had it they could not take it away from us and it would stand by us and not fail us. Not ever fail us.
p. 32-33

All honors are empty and none more than honorary masonry. Because there is nothing that will separate from the work itself. The freemasons were right in their suspicion that in the mysteries of stonemasonry were contained other mysteries. Speculatives, they were called. Noblemen who were made honorary masons. And if it is true that laying stone can teach you reverence of God and tolerance of your neighbor and love for your family it is also true that this knowledge is instilled in you through the work and not through any contemplation of the work.
p.64


But that the craft of stonemasonry should be allowed to vanish from this world is just not negotiable for me. Somewhere there is someone who wants to know. Nor will I have to seek him out. He'll find me.
p. 91