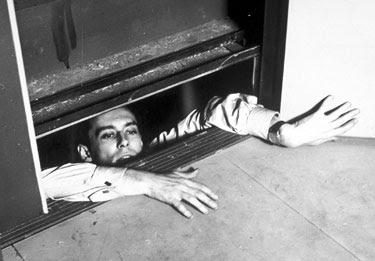 Creaky old elevators in our aging temple buildings are more than just an eccentric nuisance, and failure to keep them maintained can be more costly than just the repairs. Now an Ohio couple is suing the Huntington, West Virginia Masonic temple for negligence after being trapped in a malfunctioning elevator.

From the West Virginia Record:

On April 24, 2009, Chrystal Shepherd was in an elevator on the defendants' property when it malfunctioned, according to a complaint filed Nov. 12 in Cabell Circuit Court.

Shepherd claims the elevator fell about two stories before coming to an abrupt halt, rising briefly and then falling another short distance.

Shepherd claims she eventually was rescued by the Huntington Fire Department which responded to the scene only after individuals in the building heard her cries of distress and called for assistance.

While waiting in the elevator for assistance to arrive, Shepherd "noted that the inspection card posted by the State of West Virginia indicated that the elevator was four months overdue for periodic inspection," the complaint states.

Yes, people actually do read those inspection certificates, especially when they have a lot of time on their hands waiting for the fire department to show up.

The Spokane Masonic Center just spent $350,000 on theirs, partially funded by a grant from the Washington State Heritage Capital Projects Fund and National Park Service.
Posted by Christopher Hodapp at Friday, December 03, 2010