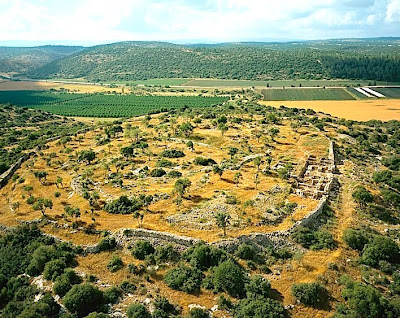 In the Elah Valley, where the Bible says David slew Goliath, excavations at the fortified city of Khirbet Qeiyafa in 2008 unearthed a multi-chambered gate and artifacts dating to David's time, around 1000 B.C.
"Was the Kingdom of David and Solomon a glorious empire—or just a little cow town? It depends on which archaeologist you ask."

National Geographic Magazine features an extensive article in its December 2010 issue about the archeology and controversy over King Solomon and King David, and whether they and the legendary Temple of Solomon even existed.

From Kings Of Controversy by Richard Draper:

In no other part of the world does archaeology so closely resemble a contact sport. Eilat Mazar is one of the reasons why. Her announcement in 2005 that she believed she had unearthed the palace of King David amounted to a ringing defense of an old-school proposition under assault for more than a quarter century—namely, that the Bible's depiction of the empire established under David and continued by his son Solomon is historically accurate. Mazar's claim has emboldened those Christians and Jews throughout the world who maintain that the Old Testament can and should be taken literally. Her purported discovery carries particular resonance in Israel, where the story of David and Solomon is interwoven with the Jews' historical claims to biblical Zion.

That narrative is familiar to any student of the Bible. A young shepherd named David from the tribe of Judah slays the giant Goliath from the enemy tribe of the Philistines, is elevated to king of Judah following the death of Saul at the close of the 11th century B.C., conquers Jerusalem, unites the people of Judah with the disparate Israelite tribes to the north, and thereupon amasses a royal dynasty that continues with Solomon well into the tenth century B.C. But while the Bible says David and Solomon built the kingdom of Israel into a powerful and prestigious empire stretching from the Mediterranean to the Jordan River, from Damascus to the Negev, there's a slight problem—namely, that despite decades of searching, archaeologists had found no solid evidence that David or Solomon ever built anything.