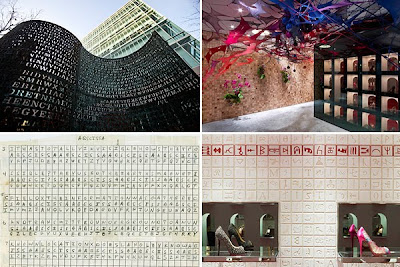 I was briefly quoted in an article in the New York Times today. Monumentally Mystifying: Power of Secrets Inspires Public Art by John Schwartz talks about Jim Sanborn's CIA sculpture, Kryptos, along with other "secret code" artwork and popular culture references:

“The human mind is comforted by the notion that a greater power has all the answers. A world in which secret messages swirl around us is exciting because it helps reinforce our belief that true enlightenment is within our reach,” Mr. Brown said. He says his home has “dozens of hidden codes, secret passageways, artifacts and symbols embedded within the design.”

Of course, it’s possible to take such things too far, and many experts say that Mr. Brown and the makers of films like the “National Treasure” series have done just that in their insistence that the Freemasons laid out the city of Washington and its buildings as part of a conspiracy to hide treasure, or, you know, something.

Christopher L. Hodapp, the author of several books on the Masons, including “Solomon’s Builders: Freemasons, Founding Fathers and the Secrets of Washington, D.C.” and “Freemasons for Dummies,” said that it just didn’t happen that way. Of the major planners of the city, he notes, only George Washington was a member of the order, and “he had little to do with the design.”

Cathy Schultz, chairwoman of the history department at the University of St. Francis in Joliet, Ill., said, “While it’s true that pyramids and obelisks and other Egyptian motifs are common in D.C., it’s not because of some secret ‘message,’ but because Enlightenment figures loved to harken back to the wisdom and architecture of the great ancient civilizations — Greece, Rome, Egypt.”

One American city actually was laid out with the Masonic symbols of square and compass integrated into the ordering of its streets: Sandusky, Ohio. No blockbuster film, apparently, has been based on this fact.

We must take comfort, then, in the fact that some mysteries are indeed out there in the world by intention and design, albeit in Sandusky...

I tried once to get in to see Kryptos. Didn't work.

I'll bet that brown noser Tom Clancy has his own parking spot in there.

While we're at it, what are the Georgia Guidestones, and who put them there?
Posted by Christopher Hodapp at Monday, December 06, 2010