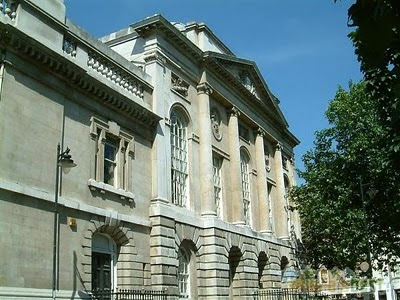 The Central London Masonic Centre is up for sale, and its resident Masonic bodies may be moving as early as this summer to new locations. (This is the second largest Masonic lodge venue in the city of London, and is NOT Freemasons' Hall in Great Queen Street.) The Centre has been a Masonic facility since the 1970s, but was originally built in 1782 as the Middlesex Sessions Court House in the area of London known as Clerkenwell.

Until 1900, the Sessions House was the largest courthouse in England, and grim justice was dished out severely. Nearby Cold Bath Fields prison and Clerkenwell's 1614 House of Detention were infamous for their brutality, and other convicted criminals were sent off to Australia and America from its courtrooms. (Alice and I got to tour the subterranean Victorian-era vaults of the House of Detention several years ago. It was a suitably horrible place to rot out one's sentence in its heyday.) The Sessions House ceased its grim business in the 1920s. 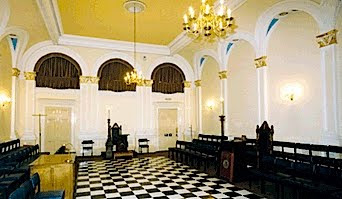 In the 1970s, a corporation of Masonic lodges purchased the historic Sessions House and remodeled it extensively to create seven lodge rooms, plus offices, conference rooms, bars and dining facilities. It is home to 179 lodges, 56 Royal Arch Chapters, 3 Mark Masters' lodges, and 2 Knight Templar Preceptories.

In recent years, the costs of maintaining the historic property have skyrocketed, and numerous complaints have been raised over catering restrictions and costs of a staff of nearly 60.

It now appears that the building is being sold to the Church of Scientology as a new London Celebrity Centre.

No official word on the new location for the existing Masonic bodies, apart from the rumor that it is a "new development."
at 2/19/2011