"Lost" Washington's Lafayette Apron To be Displayed at Mt. Vernon 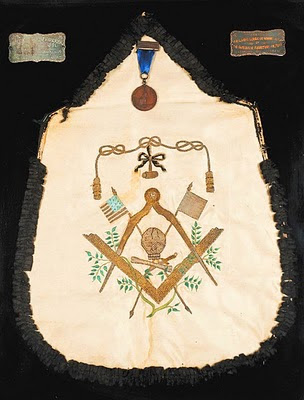 A French-made silk Masonic apron was famously presented to George Washington by General Marie-Joseph Paul Yves Roch Gilbert du Motier, the Marquis de Lafayette in 1784 at Mount Vernon. It is believed to have been worn by Washington at the cornerstone ceremony for the U.S. Capitol building in 1793. And then it went missing. Sort of.

It turns out the apron has been hiding in plain sight on the wall of Mt. Nebo Lodge No. 91 in Shepherdstown, West Virginia, ever since the early 1800s.

From "Masonic apron worn by George Washington found in Shepherdstown" by Richard Belisle at herald-mail.com: 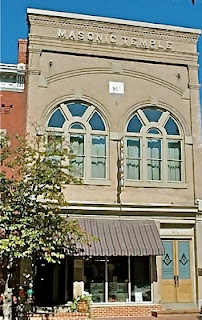 Get the information you need fast. Sign up for our Breaking News alerts today.

George Alwin, Mt. Nebo master, said Hammond gave the apron to the lodge before he died in 1820.

When Mt. Nebo celebrates its 200th anniversary on Dec. 11, the apron will be on public display in the lodge meeting room all day, Alwin said.

"It was never a secret that we've had the apron all these years," he said.

Like many of the nation's Founding Fathers, Washington was a member of the free masons, and the aprons were worn by members during various rituals and public events.

Lodge members, through their own research in recent years, had come to believe that Washington wore their apron when he laid the cornerstone of the U.S. Capitol in 1793, six years before his death.

Alwin said the early lodge minutes were lost during the Civil War. Mount Vernon historians have always known about a second French-made apron that was given to Washington. The Watson-Cassoul Apron is named for the two men who gave it to the general — Elkanah Watson, a fellow Mason, and M. Cassoul, his French business partner.

Mount Vernon curator Susan P. Schoelwer said it was that apron, not Mt. Nebo's, that Washington wore at the cornerstone-laying ceremony for the U.S. Capitol.

In 1812, Washington's nephew Lawrence Lewis, donated it to the Alexandria-Washington Masonic Lodge No. 22.

Schoelwer said Mount Vernon researchers determined that the Mt. Nebo apron was worn at the cornerstone ceremony for the Washington Monument in 1848.

In 2009, Mt. Nebo Lodge members contacted Mark Tabbert, curator of the George Washington Masonic Memorial in Alexandria, for help in authenticating their apron.

"They wanted me to look at it to verify their stories," said Tabbert, who supported Mount Vernon's version of its provenance.

"It's quite likely that Washington received it when Lafayette returned to the United States in 1784," he said. "Mount Vernon knew about the lost apron, and they're pretty convinced this is the second one owned by Washington."

On Monday, the Mt. Nebo Masons will be at Mount Vernon for the ceremony officially unveiling their apron. It will be on display there for three months, after which, Alwin said, "We're taking it back."

Hopefully, the brethren of Mt. Nebo Lodge will have a copy made and see that the original is placed in a more secure, climate controlled environment.

Photo from "Masonic apron worn by George Washington found in Shepherdstown" by Richard Belisle at herald-mail.com
Posted by Christopher Hodapp at Friday, February 18, 2011