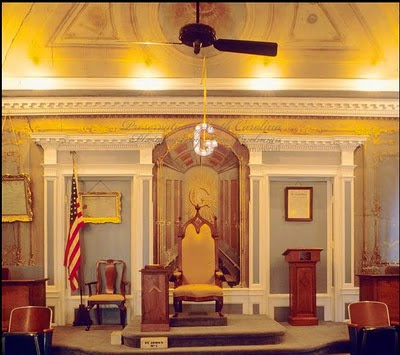 St. John’s Lodge No. 3 of New Bern, North Carolina has made its historic archival material dating back to 1772 available to researchers and historians. The collection will be stored at Tyron Palace in New Bern, part of the Office of Archives and History, an agency of the North Carolina Department of Cultural Resources.

From an announcement by the North Carolina Department of Cultural Resources:

Previously the history of St. John’s was only available in Gertrude S. Carraway’s two-volume compilation, Years of Light, first published in 1944 and appended in 1974. Now Tryon Palace and St. John’s Lodge have collaborated to make the original documents available, by appointment, to researchers who want to further explore this fascinating facet of New Bern and North Carolina history. 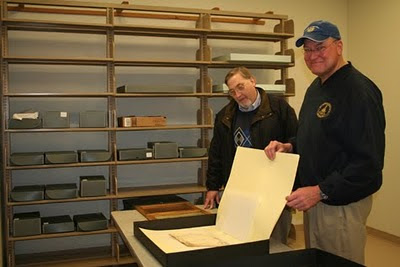 The collection also contains several artifacts, including a silver plate and three coins that were placed in the 1801 cornerstone of the St. John’s Temple building. The plate and coins were stolen by Union soldiers during the Civil War occupation but were returned to St. John’s in 1876 by a lodge of the same name — St. John’s, in Providence, R.I. Another important artifact is a copper template used to print elaborate membership certificates for lodge members, which members carried with them on their travels to prove their Masonic affiliation. A number of the letters in the lodge records bear testament to the social value of lodge membership in the 19th century, as brothers in far-off places, having lost their certificates, would write to the lodge for a replacement in order to help them gain assistance or employment. The copper template also was stolen during the Union occupation of New Bern but was returned in the 1990s by a lodge in New York.

In addition to regular lodge business, these records also help tell the story of one of the most important buildings in New Bern — the St. John’s Lodge/Scottish Rite Temple on Hancock Street. For some time prior to the destruction of Tryon Palace by fire in 1798, St. John’s Lodge meetings were held at the Palace, as well as special meetings of the Grand Lodge like the 1792 grand master initiation of William R. Davie (later governor of North Carolina). After the Palace burned, New Bern was left without a large gathering place and St. John’s without a permanent home. Almost immediately plans were begun for the construction of a grand new building. In 1801 the cornerstone for the new St. John’s Masonic Temple building was placed and by 1805, the bottom half theater portion was complete and leased out for theatrical productions. When the Masonic Theater finally closed in the 1970s, it was among the oldest continuously-operated theaters in the United States. It has more recently been restored and is currently in use.

St. John's Lodge, No. 3, AF& AM has one of the oldest Masonic lodge halls still in use in the US, and was chartered January 10, 1772. Its theatre is believed to be the oldest operating in the United States, and was opened in 1804.

Read the story of St. John’s Lodge No. 3 by William L. Dill here.
Posted by Christopher Hodapp at Saturday, February 19, 2011