At podium, SK Duane Vaught, GCT, Grand Generalissimo of the Grand Encampment, PGC and MWPGM, begins the ceremony to elevate four Hoosier Sir Knights to the rank and honor of Knight Commander of the Temple for outstanding service to Templary, Freemasonry, or mankind. The honored knights, standing with their ladies, are, from left, Virgil Humphrey, Carson Smith, REGC James L. Dove, and MW Kenneth Willis, Grand Master of Masons of Indiana. Seated is the evening’s master of ceremonies, SK George Ingles, KCT, PGC and Senior Grand Warden of the Grand Lodge of Indiana, and his lady. [Photo by SK Charles Combi, from the Indiana supplement to the Knights Templar Magazine, March 2011]

I'm still catching up on some stories from last month that fell between the stacks of stuff that clutter my desk like largish cluttering things.

Each year in January, the Grand Commandery of Knights Templar in Indiana celebrates the Newby-Avery Banquet, to raise money for the permanent fund of the Grand Commandery, and to honor Sir Knights who have labored for the benefit of the Order. This past January 8th, the 113th annual banquet was held, with representatives of Indiana's Templars, as well as visiting officers of the Grand Encampment of the USA.

The event is named for the two Indiana Sir Knights who have served as Most Eminent Grand Masters of the Grand Encampment of Knights Templar of the United States, Sir Knight Leonidas Perry Newby (1922-25), and Sir Knight Willard Meredith Avery (1976-79). Sir Knight Avery is still very much alive and turned 104 this month.

A certificate and a lapel pin or plaque is awarded for the initial $250.00 contribution. Fellows and Chairs are also invited to the annual Newby-Avery Banquet. This year, the Newby-Avery contributions totaled $5,000, including eight new Fellows, and one Newby-Avery Chair sponsored by Kokomo Commandery No. 36. 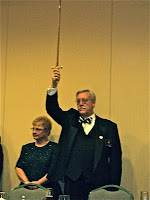 It is at this banquet that the Grand Encampment of the US bestows a distinguished honor on individual Knights. On behalf of the Grand Encampment, Sir Knight Duane L. Vaught, Right Eminent Grand Generalissimo (and Past Grand Master of Indiana F&AM) presented the honor and title of Knight Commander of the Temple to MW Grand Master Ken E. Willis Jr. (photo), Right Eminent Grand Commander James Dove, Sir Knight Virgil Humphrey and Sir Knight Carson Smith. 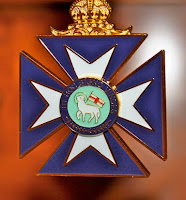 Knight Commander of the Temple (abbreviated KCT) is the second highest decoration of the Grand Encampment, and was adopted in the 1991-1994 Triennium.

When conferred, it is explained that it does not mean that your work is done, but that it also stands for the work you are expected to do in future for the Knights Templar, as well. 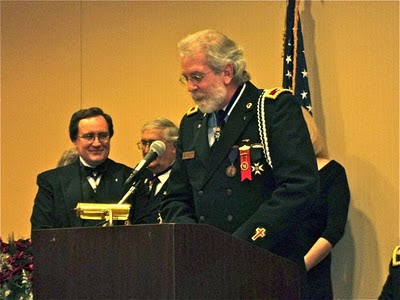 My friend and Brother Carson (above) has been an enthusiastic supporter of the Knights Templar ever since joining the fraternity. In four years, he has personally signed the petitions of more than 100 Knights Templar in the state of Indiana, and holds life memberships in six Indiana commanderies (and three blue lodges, as well). He is a Past Eminent Commander of Raper Commandery No. 1. Carson travels anywhere he is asked to assist in conferring the orders, participates in drill teams, and is a founding member of Levent Preceptory, Indiana's medieval recreation Templar degree team. I can think of no more tireless worker for Templary anywhere.

Sir Knight David Goodwin, Right Eminent Deputy Grand Master of the Grand Encampment, was also on hand to present a $40,000 grant to Indiana University on behalf of the Knights Templar Eye Foundation.

If you are an Indiana Templar and interested in supporting the Grand Commandery by becoming a Newby-Avery Fellow, or by your Commandery sponsoring a Chair, send your contribution payable to the Grand Commandery of Indiana, to Grand Recorder Lawrence V. Kaminsky, P.O. Box 1690, Highland, Indiana 46322-1690.
Posted by Christopher Hodapp at Wednesday, February 23, 2011