Researchers from London's National History Museum Department of Paleontology are the reporting the discovery of the earliest Ice Age cups made from human skulls. Silvia Bello, Simon Parfitt and Chris Stringer have discovered three skull cups in England that are roughly 14,700 years old, at Gough's Cave in Somerset.

From an article on Reuters today, "Ancient Britons ate dead and made skulls into cups" by Madeleine Cowley:

The researchers said the cups may have been used as containers or for some ritualistic purpose.

"It's impossible to know how the skull-cups were used back then, but in recent examples they may hold blood, wine or food during rituals," said Chris Stringer, who helped excavate one of the skull-cups in 1987.

At about 14,700 years old, the skull-cups from Gough's Cave are the oldest directly dated examples in the world, the researchers said.

They said the circumstances behind the deaths of the Cro-Magnons (European early modern humans), whose bones they discovered, can only be guessed at.

The use of skulls as drinking vessels has been well-documented in historical accounts and recent ethnographic studies, the researchers explained in their study.

Ancient Greek historian Herodotus portrayed the Scythians as people who drank from the skulls of their enemies and similar practices have been recorded among Vikings, Australian Aborigines and in tantric Buddhist rituals.

A precise cast of one of the skull-cups, complete with cut marks, will go on display in the Natural History Museum in London from March 1 for three months. 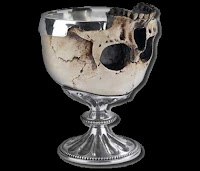 Perhaps the most famous skull goblet in history belonged to George Gordon, Lord Byron, which he immortalized in his 1808 poem, Lines Inscribed Upon a Cup Formed from a Skull:

Start not - nor deem my spirit fled;
In me behold the only skull
From which, unlike a living head,
Whatever flows is never dull.

I lived, I loved, I quaffed, like thee:
I died: let earth my bones resign;
Fill up - thou canst not injure me;
The worm hath fouler lips than thine.

Better to hold the sparkling grape,
Than nurse the earth-worm's slimy brood;
And circle in the goblet's shape
The drink of gods, than reptile's food.

Where once my wit, perchance, hath shone,
In aid of others' let me shine;
And when, alas! our brains are gone,
What nobler substitute than wine?

Quaff while thou canst: another race,
When thou and thine, like me, are sped,
May rescue thee from earth's embrace,
And rhyme and revel with the dead.

Why not? since through life's little day
Our heads such sad effects produce;
Redeemed from worms and wasting clay,
This chance is theirs, to be of use.

The legend was that the young Byron ransacked the graves of his ancestors on the family estate, Newstead Abbey, and had a drinking cup made of one of their skulls. Byron himself told a slightly different version:

The gardener in digging discovered a skull that had probably belonged to some jolly friar or monk of the Abbey about the time it was demonasteried. Observing it to be of giant size and in a perfect state of preservation, a strange fancy seized me of having it set and mounted as a drinking cup. I accordingly sent it to town, and it returned to me with a very high polish and of a mottled colour like tortoiseshell.