How Boston Rockers Grew Up and Became Freemasons 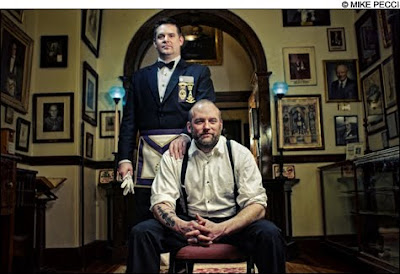 There's a terrific article in the Boston Phoenix today about "How the Boston rock scene grew up, got real jobs, and became — Freemasons?" by Eugenia Williamson. Featuring the brethren of Boston's Amicable Lodge, like J. R. Roach, former drummer for Sam Black Church, who toured with KISS, Ted Nugent, Motörhead, Black Sabbath, and Dio.

"I think a lot of people's misconception of the fraternity is that it's a bunch of stodgy old men," says Master Mason J.R. Roach. Roach, 41, is a big dude with black hair and a couple of tattoos that he keeps covered up. . .

Roach is at the vanguard of the Masonic resurgence. Membership — like that of all fraternal orders — declined after the salad days of the 1960s. But something changed in the mid-2000s: young men became interested in the Masons once more. Gen-Xers settled down and needed a night away from the wife and kids, and Gen-Yers rebelled against navel-gazing, Baby Boomer parents.

Or maybe they read Dan Brown's 2003 thriller, The Da Vinci Code, or saw Nicolas Cage's star turn in the 2004 film National Treasure. Both narratives placed Masons at the heart of international conspiracies upon which hinged nothing less than the fate of the world.

Nick Batzell, a 25-year-old sculptor's apprentice, got interested in Masonry when he saw a picture of Czech printmaker Alphonse Mucha in full Masonic regalia. "I studied Romanesque and Gothic architecture in [art] school," Batzell says. "William Hogarth was a Mason, and Paul Revere — he was the most famous silversmith, ever."

Roach spent 18 years on the road as a musician. "Record labels, promoters, club owners — sometimes you meet the sweetest people in the world and sometimes not so much," he says. "I really wish, with all the traveling I did, that I had been a Mason." Now, as a professional Mason, Roach spends his days in the headquarters of the Supreme Council, 33rd Degree, of the Ancient Accepted Scottish Rite.

Several of these brethren were also featured in a Boston Herald article back in 2008. Nicely done, brothers.
Written by Christopher Hodapp at 2/17/2011

Email ThisBlogThis!Share to TwitterShare to FacebookShare to Pinterest
Labels: boston