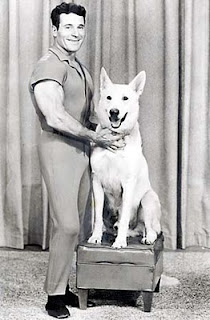 Brother Jack LaLanne (1914-2011), world renowned fitness expert and motivational speaker, passed away Sunday at his home in Morro Bay at the age of 96. He was born in 1914 in San Francisco to French immigrants. LaLanne’s career in the fitness industry spanned 75 years, and he is credited with founding the modern fitness movement. His exercise television show debuted in 1951 and ran for an incredible 34 years. He invented fitness equipment, created videos, and was notorious for record-breaking stunts. In 1955 at the age of 41, LaLanne swam from Alcatraz Island to Fisherman's Wharf while handcuffed. (He did it again at age 60, this time hauling a 1,000 pound boat behind him).

Brother LaLanne was raised as a Master Mason on March 17, 1949 in Chateau Thierry Lodge No. 569. It later merged with Crow Canyon Lodge No. 551 in Castro Valley, where LaLanne was still a member. He is survived by his wife of 52 years, Elaine.

(His membership is mentioned most recently in Crow Canyon Lodge's January 2009 Trestle Board.)