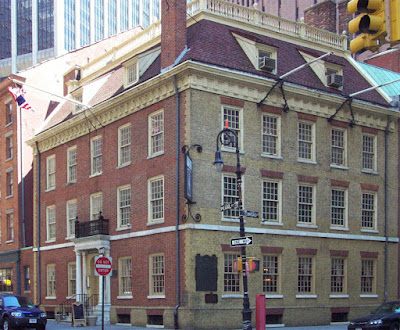 "With a heart full of love and gratitude I now take leave of you. I most devoutly wish that your latter days may be as prosperous and happy as your former ones have been glorious and honorable."
--George Washington, December 4, 1783. 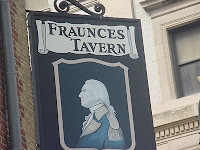 It may be almost a year later than originally expected, but Fraunces Tavern, where Gen. George Washington bade farewell to his officers at the end of the Revolutionary War and where patrons have been eating and drinking on and off since 1762, has finally taken a big leap forward in its reincarnation.

The bar, operated by an Irish outfit called the Porterhouse Group, opened last night for the first time since closing in February, attracting a mellow crowd of industry insiders, people who worked on the project and longtime patrons drawn to the place’s sense of history and extensive collection of craft beers.

“To be the first customers at Fraunces Tavern, we couldn’t give up that opportunity,” said Mike Carroll, a lawyer who, along with his friends Kevin McAdams and Eddie Brady, was the first to come in for a drink. “It means we’re here before George Washington.”

Well, sort of. First opened in 1762 as the Queen’s Head Tavern, the building once housed the administrative offices for the fledgling nation, when New York was its capital. But by 1904, after centuries of operating as a tavern, rooming house and hotel and falling victim to fire, it was rundown and significantly altered.

The Sons of the Revolution in the State of New York acquired the building, at 54 Pearl Street, and turned it into a museum, restoring the Long Room on the second floor, where General Washington bade his famous adieu, with a restaurant on the ground floor. The Porterhouse Group plans to reopen that restaurant in about two weeks, but the pub is in another connected building, at 58 Pearl Street, which was acquired later by the Sons of the Revolution and is now part of the complex that houses the museum as well as administrative offices, storage and the Anglers’ Club.

The Fraunces Tavern Museum was built in 1719 for Mr. Stephan Delancey and his family. Later on in 1762, the home was purchased by Samuel Fraunces, who converted it and made it very popular and famous as the Queen's Head Tavern. In 1783, General George Washington gave his farewell address to the officers of the Continental Army in the tavern. After the war, when New York was the nation’s first capital, the tavern was rented to the new government to house the offices of the Departments of War, Treasury and Foreign Affairs.

Brother Fraunces joined Holland Lodge No. 8, in New York City in 1789. When Washington became President in April that year, he picked Samuel Fraunces to be the steward of his executive mansion in New York. When the U.S. capital moved to Philadelphia in 1790, Fraunces headed Washington's presidential household there until 1794.