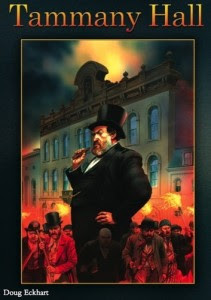 My mother lodge, Broad Ripple No. 643, had its annual budget meeting Thursday night, which we all look forward to like a root canal from Orin Scrivello. But the gathering afterwards was a warm and friendly way to ignore the falling bits of global warming accumulating in the parking lot.

One of Ripple's members is a gentleman named Doug Eckhart, and in the course of the evening, he told me he had designed an unusual board game. Did he ever. It's called "Tammany Hall," published by StrataMax Games. From a review at www.gaminggang.com:

In Tammany Hall, each player is a politician in New York City during the latter half of the nineteenth century (approximately 1850-1870). This was a time when large American cities were introduced to wave upon wave of newly settled immigrants. New York was the largest melting pot due to the millions who passed through Ellis Island looking for entrance to a promised land. Because of this new political machines rose up to both provide for as well as exploit these diverse immigrant populations. The real life Tammany Hall was the heart of the machine that controlled the Democratic Party in New York City from the 1790’s into the late 1960s.

The game board is broken into three areas with a total of fifteen wards and the map seems to be true to the political divisions of Manhattan in the 1860’s. Which areas are in play at the start is determined by the number of players; Area I for three players, Area II for four players, and all three areas full five players. The key to victory is control of these wards and their immigrant populations. Ward 14 contains Tammany Hall, and is located in the center of the board. Tammany Hall takes place over the course of sixteen years (each game turn represents one year) and through four election cycles. Players get points for every ward in which they win an election, two points for winning the ward that contains Tammany Hall, and three points for becoming mayor (winning the most wards overall). At the end of the game players get two points for having the most political favor chips of the different immigrant groups, and one point for every unused slander token they possess.

The artwork is beautiful, and the playing board is designed after an antique map of New York. You just have to love any game that involves the use of a "slander token." 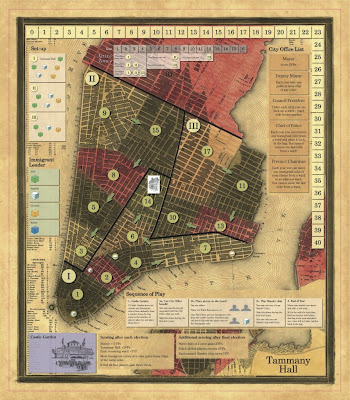