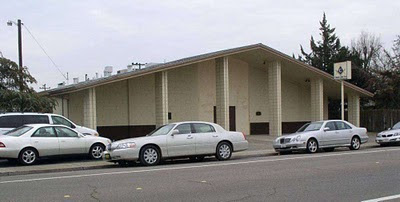 It's getting to be a monthly occurrence.

The Masonic Temple in Manteca, California, home of Tyrian Lodge No. 439, was broken into over the New Years weekend, with approximately $7,000 in damage.

From the Manteca Bulletin on January 7th:

Tyrian Lodge #439 Master John Shaughnessy said an antique organ that had been donated by the family of the late Bill Eichner, honoring his past service, was left smashed beyond repair. Eichner, a respected member of the business community in the 1960s, was remembered with a brass plate that had been mounted on the organ.

Shaughnessy said he had gone to the lodge for a Sunday evening meeting and found the door had been pried open with the building left in shambles.

“They broke the door that goes into the lodge room – it looked like they were focused against Masonry. I don’t know what we could have done to make somebody so upset,” the Master said.

The break-in was believed to have happened either Friday night or Saturday night. The clock mounted on the wall had been damaged with its hands stopped at 12:05, Shaughnessy added. Also destroyed in the vandalism were emblems representing the DeMolay for boys and the Order of Rainbow Girls that were kept in the building.

“It is very uncomfortable that somebody would do that kind of harm to our fraternity,” he said. “They had jimmied the front door open and left a foot print in the middle of the outside of the door.”

The Masonic Lodge was constructed in 1957. The organization dates back to its 1913 formation in Manteca. It previously met upstairs in the Odd Fellows Hall in the 100 block of West Yosemite Avenue. Members will celebrate their 100th anniversary in two years.

The globes on the pillars in the West were also damaged, along with a custom stained glass panel. The story reports that a new alarm and surveillance system has been installed since the break in.

I say this every single time these stories arise: With new interest in the fraternity also comes interest from less than virtuous jackasses and full-throttle criminals. If your lodge doesn't have a working alarm system, that everyone knows how to use, you need to get one. Vote on it at your very next business meeting.
Posted by Christopher Hodapp at Sunday, January 09, 2011