More Squabbles in the Irregular World 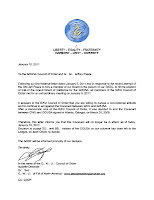 The George Washington Union (a Co-Masonic, US grand lodge) has withdrawn recognition and cooperation with the fledgling Grand Orient of the USA (click letter to enlarge). Both grand lodges are not recognized and are considered irregular by mainstream grand lodges around the world.

The George Washington Union started with one lodge in 1976, George Washington Lodge No. 1, and received a charter from the Grand Orient of France in 1978. In 2002, it was established as its own grand lodge in the US, with the blessing and cooperation of the GO of France. Today it has just five lodges nationwide, and according to the 2006 World Masonic Report, the entire grand lodge had just 37 members that year.

The Grand Orient of the USA was created between 2005-2006 by a group of expelled or disgruntled mainstream Freemasons from Georgia and other jurisdictions. The GOUSA has been troubled since its beginning, marked by the rapid resignation of its first two Grand Masters. The GOUSA signed a treaty of some kind with the Grand Orient of France in 2008 (which is also considered irregular and is unrecognized by the overwhelming number of Masons and grand lodges around the world).

Other messages have been circulating that all is not well with the GOUSA's high-visibility Halcyon Lodge in Cleveland, Ohio, touted as the GOUSA's big success story. Halcyon settled the lawsuit brought by the Grand Lodge of Ohio F&AM seeking to prevent the renegade lodge from turning in nits charter, transferring the temple property to a new organization, and going rogue. But now there is apparently a split within the lodge's membership about their future direction.

As a purely casual observer, it will be interesting to see if the Grand Orient of France now dissolves its treaty (or whatever it is) with the GOUSA, in support of the GWU. Admittedly, this is pretty inconsequential stuff in the grand scheme of things, but it is worth reporting because of the inflated internet presence the GOUSA has displayed over the few years of its life, and the lavish claims of its supporters.

In the interest of correcting the timeline, I have been sent a copy of a letter sent from the GOUSA to the GWU, severing relations a week before the GWU letter was issued (click letter to enlarge). 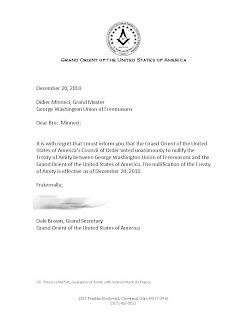 Carry on.
Posted by Christopher Hodapp at Tuesday, January 18, 2011