Grand Priory of the Reformed and Rectified Rite of the USA 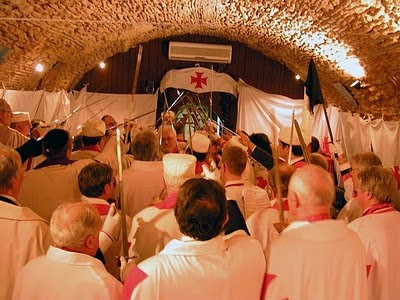 A group of brethren traveled to France last week and received the degrees of the Knights Beneficent of the Holy City (CBCS). The new Grand Priory of the Reformed and Rectified Rite of the USA will be initiating its first members at Masonic Week in Alexandria, Virginia in February.

CBCS is an invitational body, and a spiritual, esoteric, and strictly Christian rite of Templary—most probably descended from the Rite of Strict Observance in Germany and France prior to the French Revolution.

As reported here, the Grand Encampment of Knights Templar in the USA officially received a charter in December 2010 from the French Grand Prieure Ecossais Reforme et Rectifie d'Occitanie to form the Grand Priory of the Reformed and Rectified Rite of the USA.

The ongoing dispute with the Great Priory of America CBCS, chartered in 1934, continues.
Posted by Christopher Hodapp at Sunday, January 30, 2011