Catching Up on Masonic News

After a long hiatus, W:.B:. Cory Siegler has returned with his online Masonic publication, The Working Tools.


Australian Freemasons in Queensland are raising AU$1 million for flood relief. They have already reached 30% of their goal.

Many times, lodges in small communities have a better chance of getting their events in the local radio, TV and newspapers than bigger communities.

Brethren of Ione Masonic Lodge No. 80 in Ione, California made the local paper with their officer's installation.

The Princess Pine Order of the Eastern Star Chapter No. 67 in Williams Lake, British Columbia made their paper for their local charity work.


On Saturday, the Springfield Masonic Community, a retirement community of the Grand Lodge of Ohio F&AM, presented a program to honor the famed Tuskegee Airmen, and Supreme Court Justice Thurgood Marshall to kick off Black History Month. Three Ohio members of the Airmen—Leslie Edwards of Cincinnati, Charles Feaster of Xenia and Paul Menefield of Columbus—were able to attend. Hundreds of folks turned out for this event.

Manchester, England's Freemasons' Hall is being leased to private developers for 999 years, but the Masons aren't leaving. There's a lesson for lodges considering giving up their irreplaceable temples. The Masons retain ownership of the building and keep their top floor lodge rooms. See their website here.

Hip-hop star Jennifer Hudson tackles the rampant rumor mill that music stars have sold their souls to the Illuminati. But then, that's just what you'd expect her to say:

In the entertainment industry, Illuminati rumors run rampant, and everyone from Rihanna to Kanye West has dealt with accusations their success is due to their involvement in it. Although many celebrities have kept mum on the subject, Jennifer Hudson is speaking out against all the talk about a secret society. During a recent Ustream session, she told fans:

“I’m so glad someone brought this Illuminati mess up because only a child of God would address it. That is the most ignorant thing I have ever heard in my life. And it’s offensive because basically what? The people that are here today don’t deserve to be where they are? What, we didn’t work for it? So I find—and I hate to go there—but I find it’s those that can’t make it that would probably join Illuminati, or whoever that is, to get somewhere.”

Hudson's mother, older brother, and her nephew were all murdered in 2008. Gregory King, the nephew's father, claimed in September 2010 that the Oscar winner Hudson was a Freemason who sacrificed her family to advance her career. 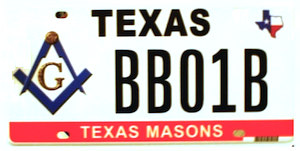 Tomorrow, 1/31, is the final day to vote for a Masonic license plate in Texas. Just a reminder. I would never encourage out of state Masons to vote for a Texas matter. Or to vote multiple times. Never.

In the wake of the international Wikileaks hootenanny, there were bound to arrive copycats eager to spread unattributed tales of gossip, sour grapes, or legitimate gripes. The trouble with whistle blowing is that the whistle can blow back, especially in Freemasonry. So, with some sense of dread, coupled with the creepy curiosity of watching a train wreck, I pass along the arrival of a new website, Masonicleaks.com .

I simply remind all involved that the Masonic Crusade website, in which PGM Frank Haas vs. Grand Lodge of West Virginia dirty laundry was aired over a four year period, resulted in a lawsuit, a huge expenditure of money on both sides, a public black eye for the fraternity on an international basis, yanked recognition against the Grand Lodge of Ohio, more expulsions, lost friendships, broken trusts—and Frank Haas still remains expelled in West Virginia.

The Internet will kill us all.
Posted by Christopher Hodapp at Sunday, January 30, 2011