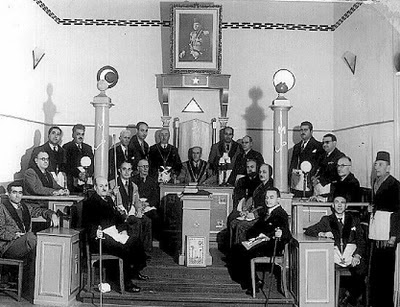 A Cairo Masonic lodge in the 1940s, under a portrait of King Farouk
With the turmoil currently raging in Egypt, Masons may be interested in the history of Freemasonry in that country over the years.
After French troops brought Masonry to Egypt with Napoleon's invasion in 1798, the fraternity expanded there. Lodges were chartered by French and German grand lodges, and by the 1860s, there were Italian, English and Scottish lodges at work, as well. Turkish Masons also influenced the Craft there. Naturally, with that many foreign lodges in the country, schisms arose, and several competing grand lodges were formed at various times in Egypt. So called "higher" degrees brought by different rites and supreme councils created further chaos. The dominant grand lodge that seemed to survive the longest was the National Grand Orient of Egypt, and its lodges worked in Arabic, Hebrew, Greek, French, Italian and German.

Egypt's kings, from Isma'il Pasha the Magnificent in the 1860s up through King Farouk in the 1950s, were made honorary grand masters in the National Grand Orient of Egypt, although none are believed to have been actually initiated into lodges. Masonry was an important link between Egypt and Western thought
After the end of WWII and Egypt's humiliating losses in Palestine to the brand new state of Israel in 1948, Freemasonry was branded as a Zionist organization (along with the B'nai B'rith, which was patterned after Masonry, and had lodges in Cairo and Alexandria). The revolution that pitched Farouk out of the country helped to raise distrust of Masonry, as both a perceived Jewish organization, as well as being a haven for entrenched government and business fat cats.

Freemasonry was under great pressure to close in Egypt by 1954 under the Nationalist Movement and Gamal Abdel Nasser became Prime Minister and the British gave up control of the Suez Canal. It was officially outlawed in 1964. Masonry still gets trotted out as a boogyman periodically in Egypt, as in other Muslim countries. Rotary Clubs frequently come under fire as being nothing more than Masonry in sheep's clothing.
The Islamic Jurisdictional College of El-Azhar University in Cairo is one of the most influential Sunni organizations for interpreting Islamic law. In 1978, it issued an opinion concerning the "Freemasons' Organization."

* Freemasonry is a clandestine organization, which conceals or reveals its system, depending on the circumstances. Its actual principles are hidden from members, except for chosen members of its higher degrees.

* The members of the organization, worldwide, are drawn from men without preference for their religion, faith, or sect.

* The organization attracts members on the basis of providing personal benefits. It traps men into being politically active, and its aims are unjust.

* New members participate in ceremonies of different names and symbols, and are too frightened to disobey its regulations and orders.

* Members are free to practice their religion, but only members who are atheists are promoted to its higher degrees, based on how much they’re willing to serve its dangerous principles and plans.

* It is a political organization. It has served all revolutions, as well as military and political transformations. In all dangerous changes, a relation to this organization appears either exposed or veiled.

* It is a Jewish organization in its roots. Its secret higher international administrative board is made up of Jews, and it promotes Zionist (pro-Israel) activities.

* Its primary objectives are the distraction of all religions, and it distracts Muslims from Islam.

* It tries to recruit influential financial, political, social, or scientific people to utilize them. It does not consider applicants it cannot utilize. It recruits kings, prime ministers, high government officials, and similar individuals.

* It has branches under different names as a camouflage, so people cannot trace its activities, especially if the name of Freemasonry has opposition. These hidden branches are known as Lions, Rotary, and others. They have wicked principles that completely contradict the rules of Islam.

* There is a clear relationship between Freemasonry, Judaism, and international Zionism. It has controlled the activities of high Arab officials in the Palestinian conflict.

* Any Muslim who affiliates with it, knowing the truth of its objectives, is an infidel to Islam.

That's what the fraternity is up against in Egypt today, and why Masonry must remain underground in devoutly Islamic countries. According to Kent Henderson and Tony Pope's long out of print Freemasonry Universal, rumors have persisted that a Grand Orient of Egypt still survives secretly (or did as late as 1999), working in Egypt's biggest cities.
Bulwer Lodge of Cairo, No. 1068 was the first lodge chartered by the United Grand Lodge of England in Egypt, in 1865. It moved its charter to England after being supressed in Egypt, and has an extensive history on its website.

For a detailed account of the history, from a non-Masonic point of view, see "Freemasonry in Egypt: Is It Still Around?" by Samir Raafat in Insight Magazine, March 1, 1999.

Matthew Scanlan wrote "Freemasonry Serving Egypt"for Freemasonry Today in 2003.
Also if you have access to a Jstore account, see "Freemasonry in Egypt 1798-1921: A Study in Cultural and Political Encounters" by Karim Wissa.
And there is an excellent series of articles about the history of Egyptian Masonry in Ars Quatuor Coronatorum Volumes 81 and 82, 1969 and 1970 by W. Bro. F. D. Stevenson Drane. 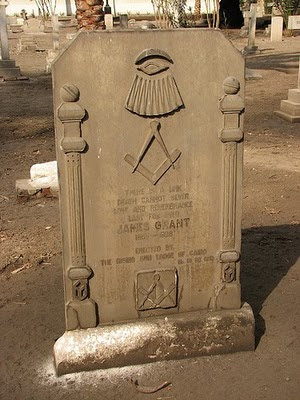 “There is a link death cannot sever, Love and remembrance last for ever.”
Freemason James Grant (1865-1928) headstone erected in Cairo's War Memorial Cemetery
by Rising Sun Lodge of Cairo No 91.
From the Masonic Traveler blog by Ken Dennis.
Written by Christopher Hodapp at 1/29/2011