A Book of Burns 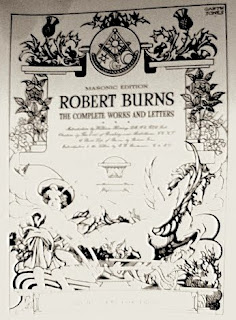 The Internet will pauper me yet. A stack of books arrived through the miracle of Abebooks that would have taken months if not years to track down just ten years ago. Now life is all just instant gratification and two-day shipping.

One of the acquisitions was Robert Burns: The Complete Works and Letters Masonic Edition. It was published in London by Collins Clear Type Press, but oddly no clue as to the publishing date. An ornate leather edition appeared in 1909, and this cloth bound version was published up into the 1930s. I'm not collecting, I just wanted the book. In addition to Burns' works, it has a lengthy chapter in the beginning about Burns' Masonic life.

His poem "No Churchman Am I" (which was set to the tune of "Prepare My Dear Brethren To The Tavern Let's Fly") often doesn't include the final stanza written for use in a Masonic lodge. I think of it when I lament my own jurisdiction's banishment of liquor from the lodge halls in the 1870s:

Then fill up a bumper and make it o'erflow,
And honours masonic prepare for to throw;
May ev'ry true Brother of the Compass and Square
Have a big-belly'd bottle when harass'd with care.