Old Master's Freemason Whisky To Be Imported to US 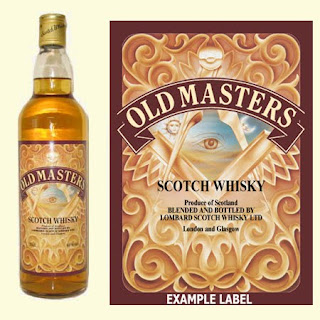 Over the weekend, I posted the image of Lombard's Old Master's Freemason Whisky in a story about Colorado relaxing its alcohol rules simply as an image to remind brethren of Masonry's long tradition of enjoying tasty adult beverages outside of the US. Little did I realize it would touch off a flurry of backchannel and Facebook posts expressing interest in this product.

I wrote to two representatives of Lombard's, Vici Wine and Spirits located in Florida, asking about availability in the US, and both said it was unavailable here. Vici's Chuck Squires responded, "Unfortunately, it is illegal for us to Import that product. There was a lawsuit started by the Free Mason Society." I find that explanation questionable, since there is no national Masonic group that could do that, and courts have long held that the square and compasses, as a generic symbol and not a specific copyrighted piece of artwork, is much like a cross in its ubiquity.

Brother Ruben J. Levy in Panama contacted Mr. Richard Lombard-Chibnall at Lombard's in Scotland, and was given this somewhat more encouraging response:

"Old Masters gain(ed) USA Federal label approval on Friday, so we are certainly looking to move forward in a positive direction.

You may be interested to know, the whisky itself was reviewed in Jim Murray’s Whisky Bible 2008. It received a fabulous review - here is copy of what was written:

"Old Masters “Freemason Whisky”(92 points)
nose: The perfect nose to experience blindfolded (how else ….?) as the depth of the fruit and grain – and their happy intermingling – is astonishing. A few under-ripe gooseberries here; taste: Light, graceful arrival with the early emphasis on a Speyside malt theme before some grain and oak kinks in; finish: pretty long with touches of cocoa though the fresh malt lingers; balance: a high quality blend that doesn’t stint on the malt. The nose, in particular, is sublime.

For those inclined to bite the bullet and spend a lot of cash on shipping, the Whisky Exchange offers Old Masters and will ship to the US, starting at £53 total for the first bottle. Obviously the cost drops the more you buy. Let's just say I'll have some at Masonic Week in the Masonic Society's hospitality suite, along with some Arran's Robert Burns blend.

The new US export bottle.
Posted by Christopher Hodapp at Monday, January 25, 2010