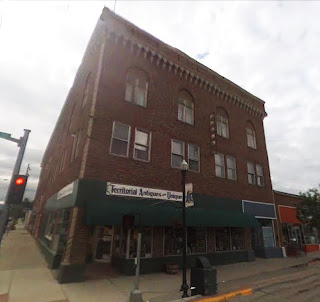 The building of Deer Lodge #14 in Deer Lodge, Montana was damaged by an arson fire in the early hours of Wednesday.

According to a story in the Montana Standard:

Ron Marler, a resident in the building, heard the alarm shortly after 1 a.m. on that Wednesday and called 911. He then reportedly grabbed a fire extinguisher to fight the blaze until firemen arrived, authorities said.

Sheriff's deputies Austin Micu and Gary Bender awakened other residents n including a 4-year-old boy — on the second floor and evacuated them through thick smoke.

Sheriff Scott Howard said the arson or arsonists entered through the front door. An accelerant was poured in the elevator, and along the floor in the entryway to the doorway where it was ignited. It burned along the floor and into the elevator. Burning rubber matting caused a thick pall of smoke throughout the first and second floors.

"No one had to move out, but some residents on the second floor are in poor health, and this could have been very bad," said county attorney Lewis Smith.

The Masonic building is home to Territorial Antiques, several offices, apartments and the Masonic Lodge. Fire damage was confined to the entryway and elevator, with smoke damage on the second floor.

Sheriff Howard and deputy fire marshal Pat Clinch are working on the investigation.

"We are hoping from samples and other evidence taken at the crime scene we can develop a suspect and continue the investigation," Howard said.

Apparently, there is an office in which mandatory drug and alcohol testing and programs are held in the building, and some have speculated that it might be a disgruntled patron of that establishment.

Deer Lodge was chartered in 1869. Brother Lewis Smith, quoted in the article, is the Senior Grand Steward of the Grand Lodge of Montana.
Posted by Christopher Hodapp at Thursday, January 28, 2010