A Brief Rant About Kindles, iPads and Ebooks 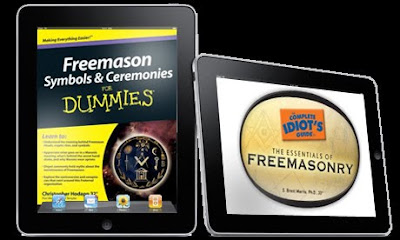 The iPad with Kindle editions of Freemason Symbols & Ceremonies For Dummies by Christopher Hodapp ($3.99), and Brent Morris' The Complete Idiot's Guide To The Essentials of Freemasonry ($2.99)

On Friday, Amazon abruptly dropped all books from publisher Macmillan from their active lists. This is huge for authors of books by that publishing giant (fortunately, I am not one). This story came in the wake of Apple's Wednesday debut of the iPad and its new online bookstore. The gist of the battle with Amazon has to do with Apple giving better terms to publishers for listing books on their new service.

This is normally boring, eye-glazing stuff, and there is undoubtedly a cadre of consumers who demand that all products be as cheap as possible, and publishers and authors be damned. But if you have any interest in the technical details of the book business, take the time to read author Charles Stross' blog entry Amazon, Macmillan: an outsider's guide to the fight. Amazon may be cheap and easy for you as a consumer, but they screw the creators of books, as well as traditional bookstores and wholesalers, to the wall, and make money coming and going. That ultimately harms the book business all the way around. As Stross points out, "book publishing is notoriously, uniquely unprofitable," and Amazon's model of e-books via Kindle is even less profitable to everyone but Amazon.

Consider that Apple announced its cut from e-book sales would be just 30%, compared with Amazon's whopping 70% of the sale price. Whoops, then Amazon suddenly announced late Friday they'd match Apple's deal, now that competition has arrived, with a device that will undoubtedly eviscerate Kindle reader sales.

There are those who argue that authors no longer need publishers in this wik'd kool age of the Intertubes and on-demand publishing. Balderdash. It's true that, if all you desire is to see your name in print, then Lulu yourself till the cows come home. No pesky editors to bother you with deadlines and silly nonsense like proofreading, third-party objectivity about your subject matter, layout, indexing, cover art, or marketing. But if you want to get as many copies of your book in front of as many pairs of eyeballs as possible, as well as getting some kind of partial remuneration for the months or years you spent researching and creating the work, publishers are still a pretty effective group of experts on the subject.

In the specialized world of Masonic books, mainstream publishers are no substitute for the niche publishers like Lewis Masonic, Mike Poll's Cornerstone Book Publishers, venerable Macoy's and a tiny handful of others. Screwing them out of a sizable portion of their profits only ensures they won't survive.

Amazon has been touting "millions" of Kindle readers sold over the last couple of years (that plural word could mean no more than "two" millions), but the company refuses to give out specifics. I will simply say from personal experience that any author who thinks a Kindle deal is the first stop on the publishing gravy train is kidding himself. I can say that, so far, Kindle sales of my own books have been an infinitesimal blip, compared to old fashioned, murdered tree versions. The iPad may turn out to be a game changer in that, but that's yet to be seen.

Meanwhile, publishers, in an effort to provide cheaper Kindle editions that don't detract sales from the full-sized, full-price versions, are looking for creative ways to package existing books, as seen above. Think of them as gateway drugs.