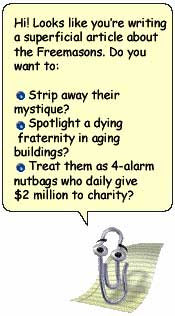 A story out of Lawrence, Kansas spotlights fraternal groups like the Masons, Knights of Columbus, Eagles and others, focussing on the "dwindling numbers" angle.

The Knights of Columbus, a fraternal organization exclusive to practicing Catholic men, 18 years and older, recently retained a volunteer membership director who uses lists of new parishioners from St. John the Evangelist Church and word-of-mouth to find new blood.

Even so, member Joe Laframboise says his club's membership skews to the over-40 set. He blames a societal shift for the younger generation's lack of interest.

"When I was growing up - and I'm over 50 - we just had regular TV, for example," he points out. "There wasn't cable TV, the VCR and DVD hadn't come around yet. There are just so many other distractions, if you wish. You can do a lot of different things different ways - by yourself, in a group."

Laframboise cites the book, "Bowling Alone: The Collapse and Revival of American Community," written by Robert Putnam in 2000, who reported that the number of Americans attending club meetings has declined by 58 percent in just one generation. Two-parent working families and increased options for free-time activities are to blame, according to the author.

"People are just doing things by themselves on their computers, and they're not interested in belonging to a group," Laframboise says.

Doris Bateson, who with her husband, Leroy, has been active in the local Fraternal Order of Eagles since the '70s, says she is particularly disturbed by how the "Bowling Alone" problem affects Generation Y.

"The reason young people aren't getting involved is because they're not fraternally oriented. We're going to have to figure out a way to change that if we're going to survive," she says.

Bateson, who is a Past International President of FOE, believes the way to do that is to emphasize community service.

Still, Eagles membership is down - approximately 20 percent for women and 50 percent for men - since the Batesons helped build the current Eagles Lodge at 1803 W. Sixth St. The smoking ban, which went into effect in 2004, didn't help either.

"We lost 200 members with the smoking ban," says Leroy Bateson. "And bingo attendance dropped, too."

Dana Laudick, 57, daughter of Leroy and Doris and FOE member, sees another reason for the organization's degeneration.

"Young people are more than willing to help, and they're great at participating in charitable fundraisers. But - and my mother will disagree with me because she's 80 and a charter member - the rituals that some of these organizations adhere to - the stuff that goes on at the meetings - these kids aren't at all interested in that. It's boring to them. It's dated. You've got a 15-20 minute ritual that they perform just to open a meeting. They're not going to sit through that."

She said her 22-year-old son recently joined the lodge, primarily to use the lounge where liquor prices are lower than bars around town.

"We may have to start doing things a little differently than we did 100 years ago in order to get the involvement and do good things for the community," Laudick says.

Every fraternal group has its own traditions and challenges, and not all of them parallel Freemasonry. But I find it interesting that the older members spotlighted in this article (no "young" members were quoted) seem to think community service and removing the aspects that make their group unique is the path to the future. Once again, changes are being suggested by members in their 50s and 60s to attract younger members, without asking the very people they seek to attract in the first place. "Bowling Alone" came out a full decade ago. Where's the new study, the up to date data about fraternalism in the last ten years?

(BTW, my own personal pet peeve about government intervention in private property is well illustrated here: the Eagles, a private club that catered to the needs of its private membership, lost 200 members to their local smoking ban. Please, no anti-smoking jihadist postings here, because I'll probably just refuse to approve those comments. But the same thing is happening in the UK. Pubs are closing at an alarming rate in part because of the national smoking ban. But that's another topic...)
Posted by Christopher Hodapp at Tuesday, January 12, 2010